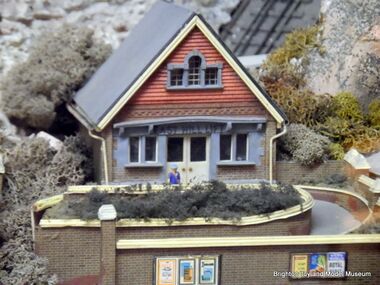 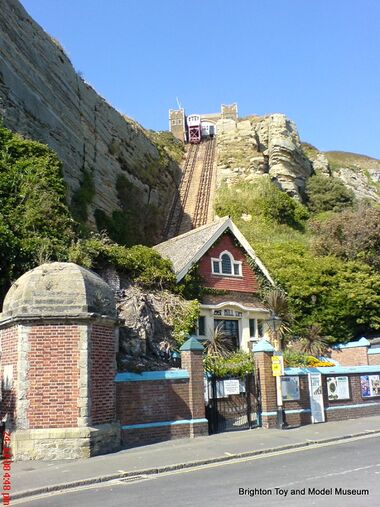 The station house at the bottom of the railway should be instantly recognisable to anyone who is familiar with this part of the Hastings coastline.

The model is in Arch Four, and at the time of writing (January 2015), is waiting to be fitted with new pushbutton controls to let visitors control the mechanism. 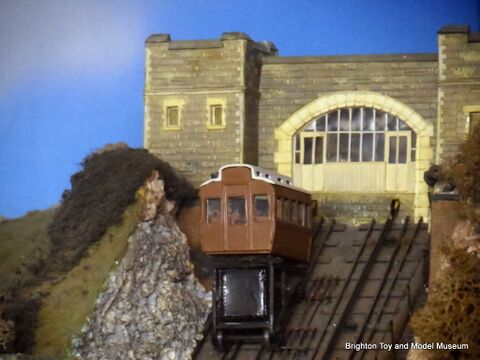 We don't currently have details of the original builder, but a plaque fitted to the base reads:

, which would seem to suggest that the model may have been presented at a meeting of the Norbury and South London Transport Club in 1987.

The West and East Hill railways

The West Hill enterprise had been run by the Hastings Lift Company, but a construction overrun of over a year and a half crippled the project's business model, and the company liquidated in 1894. The company had also applied to go on and build the East Hill funicular, but when it became clear that the the first project was not going happily, the Council (which already owned the East Hill site) decided to build and run the railway itself.

Unlike the West Hill system (which was electric), the East Hill railways was originally built as a water-driven system: the two castle-themed towers at the top of the hill housed large water-storage tanks, with smaller tanks built into each of the two cars, which were connected by a cable looped over the top of the pair of parallel tracks. when the lower parked car released its load of water and the upper car had its tank refilled, the difference in weight would cause the upper car to descend all the way to the bottom of the track, after which (after the passengers had disembarked and a new set of travellers had climbed onboard), the process would be run in reverse, with the lower car again shedding its water and the new upper car again having its tank refilled.

The drive system was replaced with an all-electric system when the railway was renovated in the mid-1970s.