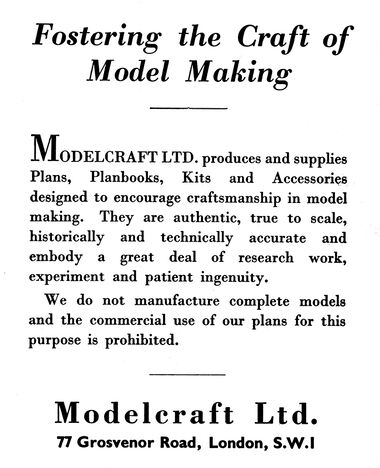 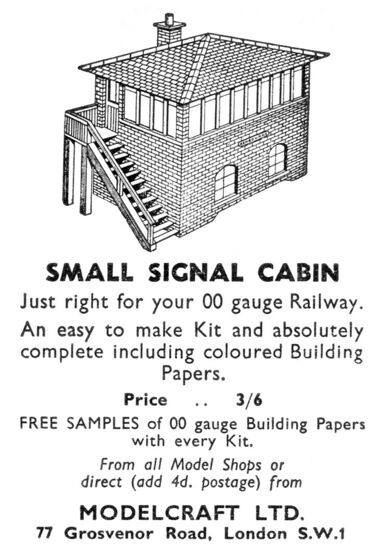 Modelcraft Ltd was set up in the late 1930s H.S. Coleman, at 77 Grosvenor Road, London SW1, to supply plans, designs, and printed paper accessories for modelmakers.

In 1940, Geoffrey Heighway joined the company as their main designer, and started designing a range of smaller-than-normal printed cut-out-and-make card sets, called Micromodels. The Micromodels idea and brand blossomed and seemed to take over Heighway's design-time, and he set up his own company, Micromodels, to continue designing and selling the range.

Meanwhile, Modelcraft continued selling the early pieces in the range, and continued selling their range of other printed paper modelmaking aids, including sheets of printed fake brickwork and other useful textures that modelmakers could use to surface their home-made model railway building work.

Notable among Modelcraft's other designers was Edward Beal, an authority on modelmaking who produced a range of authoritative reference books on models and modelmaking (with sample designs and plans). 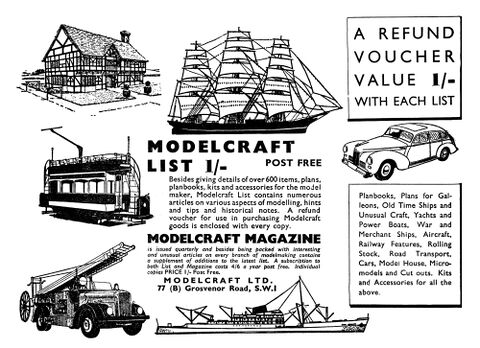 1954: Small advert in Meccano Magazine, featuring a model of the SS Gothic

A Message to our Designers

This message was originally sent out to our designers at Christmas time. It was suggested by several of them that it should be given a wider circulation, so we are publishing it in the magazine.

THIS Company started business in much the same way and with the same motives as many companies – that of producing goods which were saleable and earning a living therefrom.

The war came and subsequently the Blitz." Our livelihood lay in our factory and we were determined to hold on to it if humanly possible. Day and night it was never left unattended. In the long watches there was, at times, plenty of action for we were in a danger area, but there were other times when things were relatively quiet. At such periods the urge to do something to occupy the time was strong, and some of us commenced the building of a model Galleon.

For month after month the blitz went on. We had our "incidents," but the Galleon grew and, as it grew, a book describing its building was written. At last it was finished, or nearly so; the fitting of a sail – or two more was all that was required.

Then we "got it". It was a heavy night and our district was a focal point. H.E.'s and incendiaries rained down for fourteen hours. We fought the flames all night, but most of our building went, and with it went our Galleon. Though we had plenty of other things to think about, and the days which followed were hectic ones, yet the thought of our Galleon kept recurring – it had meant something to us.

Eventually, we put it out of our minds with the consolation that the manuscript of the book was intact. We decided to publish this and call it "Building a Galleon". It was the first of our Planbook publications. The response was surprising; it seemed that what had helped us was now helping others. Letters of appreciation began coming in. Many were complimentary letters, others went deeper than that; they expressed sincere thanks for the help the book had given them in a time of stress. Such phrases as "I would like to thank you for opening up a new field of interest for me", "It helped me through a trying time", "I had no idea I could create anything so beautiful", occurred frequently in these letters.

Gradually, through them, we began to get a new conception of Modelcraft. We realised that in fostering the craft of modelmaking we were contributing a little to the sum of human happiness. This thought has been with us ever since and has had an influence on our work.

The years have passed and the results have become an inspiration. Through our efforts many thousands in many countries have joined the brotherhood of model-makers, and we feel that the work we are now doing is not insignificant in its social aspect. The war years were trying ones; the present and the future do not seem to hold a great deal of hope. Certainly it is a sick old world at the moment. The politicians are probably doing their best but, in the end, the solution of national and international problems depends on that intangible but very, real thing – the mass will or mood of the people. We humbly feel that modelmaking, being one of those occupations which helps to put people into equable moods, may have some little influence.

Another aspect of modelmaking is the link it provides both with the past and the future. We are believers in progress, but we know that the past is indivisibly linked with the future; only from the past can be garnered the lessons of experience which are the guide to the future. So the past should not be ignored and, in recording some of the past in your plans, you are doing useful work.

It is, too, pleasant to think that your work will carry on into the future. To give but one example – we are quite sure that there will be as much demand for plans of the "Cutty Sark" fifty years hence as there is now and, fifty years hence, they will be more valuable, for that fine old ship will probably have gone to her last resting place and our plans will be one of the few existing links with that era.

The stage coach has gone, the windmills are fast disappearing, every day a few more trams come off the road. Other things take their places. Let us try to record them all, for in this recording of the past and present in model form we are performing a useful service. Many of our designs of the past are admittedly not entirely authentic for no complete data exist, and we can only base our calculations on records of contemporary work. When one considers that of such an important vessel in the history of this country as the "Golden Hind" not a single authentic record now exists, one realises how much can be lost to posterity and how the multiplication of records by means of models and model plans removes this risk to a considerable extent.

Our message to you resolves itself into the request – we, too, pledging to do our part – to maintain and ever strive to improve the standard, accuracy and authenticity of your work in the knowledge that it is a worth while job which you are doing, giving pleasure to hosts of people in the present and carrying on into the future, when many will bless your names for the tangible pictures of these times which you will have passed on to them.

Fostering the Craft of Model Making

MODELCRAFT LTD. produces and supplies Plans, Planbooks, Kits and Accessories designed to encourage craftsmanship in model making. They are authentic, true to scale, historically and techically accurate and embody a great deal of research work, experiment and practical ingenuity.

We do not manufacture complete models and the commercial use of our plans for this purpose is prohibited.