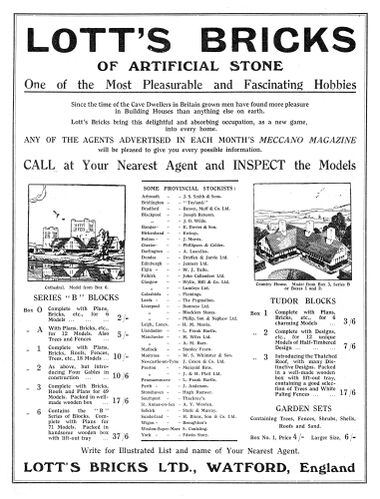 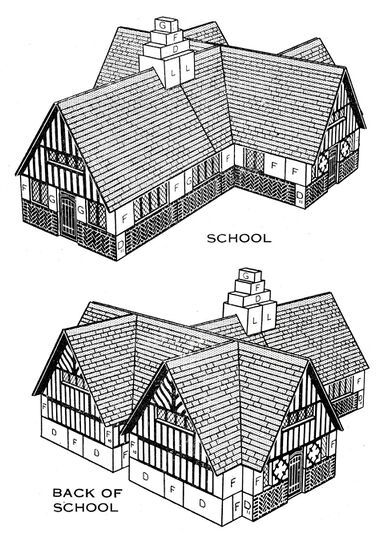 Lott's Bricks Ltd was started by E.A. Lott, and produced simple artificial-stone blocks in reasonably naturalistic colours, in rectangular and wedge shapes from ~1918 onwards. The blocks were stacked without any special pegs or joints, relying on weight and friction to stay together. Roofs were hinged pieces of printed cardboard.

Although early sets were fairly primitive, Lotts expanded the range with sets of special bricks for window pieces or Tudor-style frontages. Lotts continued until 1960, by which time more "modern" plastic systems like Lego had become popular.

The scale of the resulting buildings was designed to match gauge 0 railways and accessories.

By 1934, the original white cardbard fencing been replaced by printed fencing.

The final Lotts Bricks sets came with plastic "window" blocks, which were open on the back, and had blue window frames painted onto the textured front.

The Museum has a "Lotts Town" display of various built houses in the Lotts range in Arch Two, along with various boxes and packaging.

The Game that BUILDS the Brain

WITH Lott's Toy Bricks all manner of miniature real-life models may be built from plans by Mr. Arnold Mitchell, the well-known architect. Houses, Churches, Bridges, Towers, and so on. The Bricks are made of solid, artificial stone in convenient sizes, and with each set are chimneys and jolly red roofs. Each game develops not only the constructive, but the creative faculties. A new book of original Real-Life Games, printed in colours, and with an introductory letter from Mr. H.G. Wells, will be sent free upon request.

WHO IS YOUR BUILDER?

Does that little world, or town, which is your model railway display, boast a form of builders? Or is it the Tinsmith or the Stationer who get all the building contracts? If this is the case, it just won't do. It's not real enough. You'll have to employ a builder in the future, if you want your friends to believe that your display is like the real thing. Suppose you appoint yourself, or your young brother, as local builder and contractor. A builder's charges would be no higher than the Tinsmith's and if they are more than the Stationer's, at least real bricks last a thousand times longer than cardboard.

As for the plans and materials, ask your usual dealer for full particulars of Lott's Bricks, the British-Made Stone Building Bricks. Then you will soon learn how you can construct in solid stone, models of all the buildings found in town and countryside, and on railway and farm.