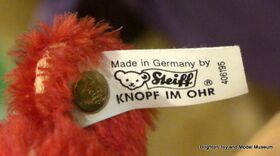 The original "Alphonzo" bear has an interesting history. He was specially commissioned from Steiff as a "one-off" for Grand Duke George Michailovich of Russia to give to his daughter, the Princess Xenia Georgievna of Russia (1903-1965), in 1908. In 1914, she took him to England on a visit to Buckingham Palace, but as World War One had started, she and her bear never returned to Russia. She kept in until her death in 1965.

Xenia's daughter Nancy Leeds Wynkoop inherited Alfonzo and offered him up for sale at Christie's in 1989 where he fetched £12,100, and the ensuing publicity seems to have then prompted Steiff's limited production run in 1990.

The original Alfonzo is now on display at Teddy Bears of Witney, who have an image of Alfonzo as part of their logo.

Alfonzo's fur is an unusual red mohair, and he has authentic period wood-wool stuffing, and black boot-button eyes. He wears a white-trimmed, orange cotton sateen suit with a Russian Cossack style tunic.

In addition to the fascinating back-story and unusual clothing, Alfonzo is also notable for being the first known example of a red mohair teddybear.