Some of the bears and teddybears in the Museum. This list is currently woefully incomplete.

Evolution of the Teddybear 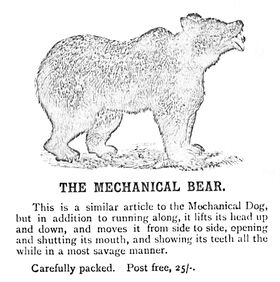 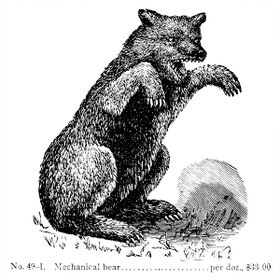 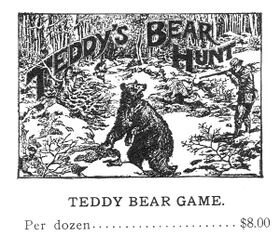 1907 advert, with an image that may or may not be one of the early Steiff bears [image info] 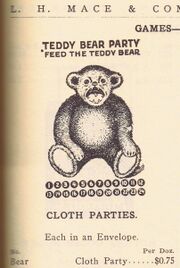 Up until the end of the Nineteenth Century, bears were typically regarded as fierce and dangerous creatures that were to be feared or hunted, much like tigers or wolves. Some travelling troupes and circuses had captive chained bears, but these were considered a novelty, and the welfare of the bears doesn't seem to have been much of an issue.

The public perception of bears changed in 1902 when US President Theodore Rooseveldt went on a hunting trip in Missisippi, and on being unable to find any bears to shoot, his hosts found a bear for him to despatch. Rooseveldt, confronted with a chained-up bear, refused to shoot it, and the episode was immortalised in a cartoon by Clifford Berryman in the Washington Post.

The image of the bear that was "too cute to shoot" caught on, and when an American visiting the 1903 Leipzig Toy Fair spotted the Steiff stand, where Steiff's new bear toys designed by Richard Steiff didn't seem to be attracting much attention, he bought the lot and ordered two thousand more to be shipped to the US to capitalise on the American Public's interest in "Teddy's Bear".

Although the name of Steiff went on to become almost synonymous with teddybears, with especially rare and desirable pieces demanding huge sums from collectors, there are no known surviving examples of Steiff's first bear. This is probably partly because the time that these bears were produced, Steiff had not yet started using their distinctive "button in ear" trademark, so examples of these early bears would not have been obviously recognisable as "Steiffs".

This leaves open the tantalising possibility that of the thousands of first-generation bears that were produced, many may have survived and be sitting in attics and toychests, unrecognised. It's estimated that if anyone found one of these bears , the price that it'd fetch at auction would be well into six figures.

The popularity of Steiff's bears led to imitations, and Steiff responded by sewing a button into the ear of their bears to show that it was a genuine Steiff bear. Customers began to see the "ear-button" as a sign of quality, and Steiff's competitors responded by sewing buttons into the ears of their bears too, until a number of court cases brought by Steiff stopped them.

The shape and characteristics of teddybears continued to shift through the early years with jointed bodyshapes becoming less bearlike and more like human dolls, and with non-jointed bears eventually settling on the popular modern teddybear shape with arms and legs akimbo to make the bear easily huggable and carryable by a small child.