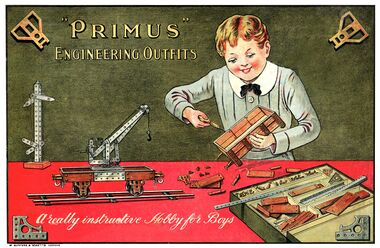 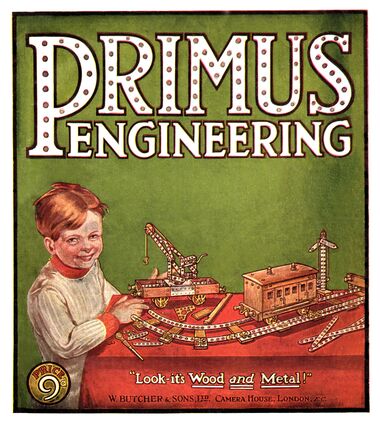 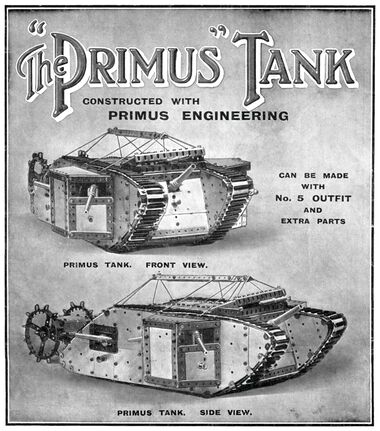 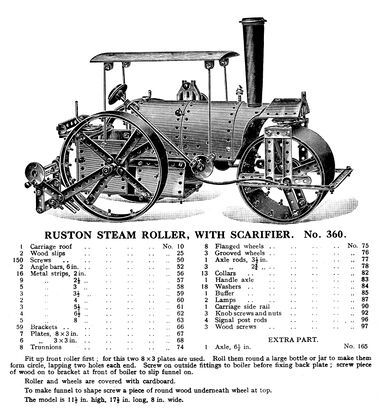 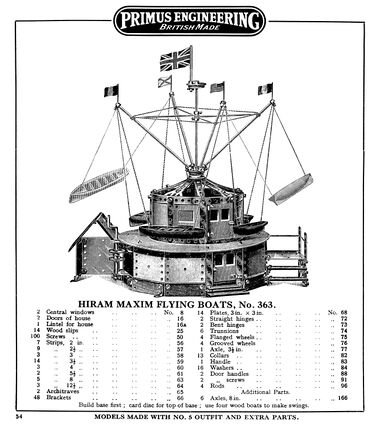 Primus Engineering (W. Butcher & Sons, London) produced a range of construction toys between 1913 and 1923 that differed from most of the other "Meccano-like", "metal builder" toys in that they included both wooden and metal parts.

The availability of the sets is sometimes listed as ending in 1923, and sometimes 1926. Part of the range appeared in the 1924 Bassett-Lowke Catalogue "B" for 1924, suggesting that perhaps Bassett-Lowke might have bought up the remaining stock.

W. Butcher & Sons had its roots in a Nineteenth Century business (under a succession of "Butcher"-related names) that mostly produced camera and camera equipment, and William Frederick Butcher's name appears on a number of patents for camera mechanisms. During WW1, the company could no longer import camera equipment from Germany, and created a joint camera manufacturing business with fellow camera-maker Houghtons in 1915. W. Butcher finally merged with Houghtons in 1926 to form Houghton-Butcher. Shutting down the Primus Engineering construction set range may have been a rationalisation move in advance of creating the new merged camera manufacturing company.

Although the Primus range included strips and trunnions and wheels similar to those found in Meccano sets, the company tried to differentiate itself from Meccano by not slavishly adhering to the principle that everything in our world could be appropriately modelled using thin metal strips and nuts and bolts.

Primus also included chunky wooden "timbers" with unobtrusive end-holes, as well as wooden blank panels, and panels with windows, allowing the user to make wooden-sided wagons, simple buildings and cabs, and even complete wooden-sided gauge 1 railway carriages (Saloon Carriage No.352) without the result being a distracting mass of metal plates, space holes and protruding screwheads.

To drive this differential home, the company used the box slogan,

While it might be tempting to consider the Primus metal parts to be "knockoffs" of their Meccano counterparts ... and indeed, the simple strips were almost indistinguishable from the Meccano versions ... the relationship between the two companies was a little more complex than this, as Primus sets already included trunnion and architrave parts some years before their equivalents were added to the Meccano range. In this respect it could be argued that the later Meccano Ltd pieces might have been inspired by the Primus versions (although the geometrically-simpler and more abstract Meccano version were possibly more general-purpose and "better" in this regard).

The iconic Meccano trunnion (Meccano Part 126 and 126a) immediately became an important part of the Meccano system, and while the architrave part might seem less significant, Frank Hornby did credit the Meccano architrave as having inspired the Meccano-built prototype of what later became The Hornby Train. Hornby said that the Meccano architrave suggested to him the idea that it might make a useful locomotive cab sidepiece ... but Hornby must have been aware that Primus were using their architrave piece for vehicle side-windows.

Primus surprised the toy industry in 1916 by bringing out a large sophisticated model tank almost immediately after the first British military prototypes had been seen in public in ~autumn 1916, later described as being made from the No.5 set "and additional parts".

A little before the real tanks were announced to the British public, almost nobody knew that such things existed, as the development project had been top secret (the reason why tanks are called tanks is because in the early days, those involved with the project had pretended that the large metal boxes that were being built were storage tanks).

Getting their "tank" model into toyshop window displays, where the public could gawp at them, was a considerable public relations coup.

As of August 2016, the "built" Primus models that we have on display consist of a Primus clockwork Locomotive and Goods Truck parked on a length of gauge 1 track in front of a Primus Railway Station. We'd dearly love to expand this with a Primus Passenger Carriage, if anyone out there has one, or has the parts to make one.