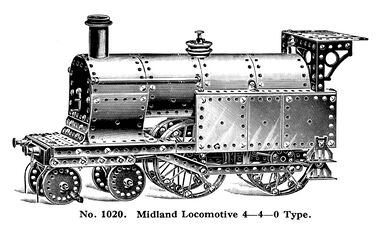 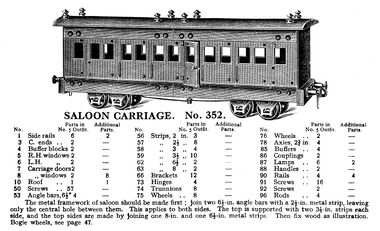 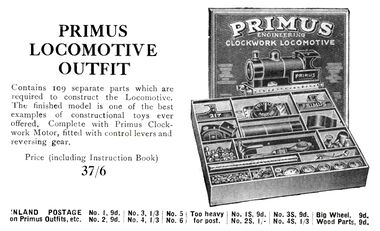 One of the applications where Primus Engineering's mix of wood and metal was particularly effective was the construction of models of wooden-sided wagons and railway carriages, where the wooden Primus panels added an additional level of authenticity. Although varnished teak wooden carriages now tend to be associated with the LNER (1921-1948), other earlier railway companies (such as the Great Eastern Railway, absorbed into the LNER in 1921) had also used a varnished wood finish. Being able to replicate the look of real wood on carriages was something that couldn't really be done using the competing Meccano.

Another point where Primus scored was in having a dedicated custom locomotive kit in their range (powered by the Primus Clockwork Motor), which meant that they could produce all sorts of designs for pieces of rolling stock, without having to worry about what was going to be hauling them.

Their competitor Meccano Ltd., having briefly experimented with the idea of railway wagons that could be taken apart and reassembled using standard Meccano nuts and bolts, quickly decided that if any of their customers wanted a train set, they should buy the items ready-built from the Hornby Trains gauge 0 range rather than try to make them from Meccano. This may explain the otherwise surprising lack of support from Meccano Ltd for constructional train designs – while Meccano Ltd had dedicated Motor Car Construction Kits and Aeroplane Construction Kits with highly specialised parts like bodyshells and fuselages, there wasn't a corresponding dedicated construction set for Meccano-based railway locomotives.

Although Primus did supply produce a design for making track from Primus parts, this would probably not have been very practical for anything other than a simple display stand - you wouldn't want to use that approach to laboriously (and expensively) build a complete circuit of track. However, Primus did say that the wheel spacing on the models could be adjusted to fit either gauge 0 or gauge 1 track, so owners could just buy conventional two-rail track to display or run their pieces if they wanted.