A typical example of an American Stick Bear from the 1920s's, wearing a pair of tan leather boots. 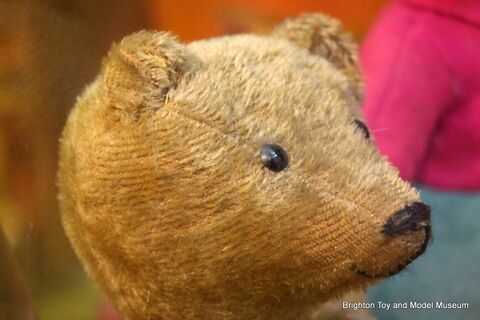 This simply-made bear is brown and virtually shapeless when lying flat. It has a sausage-shaped body, an inverted V-shaped mouth and a small, embroidered, black nose.As it was produced by the masses, their features were reduced and resulted into a simple bear without belly nor hump, with straight arms and a straight torso.

Given that stickbears were designed to be affordable (and making miniature leather boots would have taken someone a fair amount of time), it seems likely that the boots would have been handmade for this specific bear after it was bought, perhaps by the bear's owner or by a member of their family.