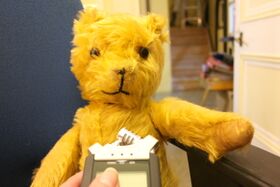 Buddy the Museum Bear (a.k.a. Buddy Bear) is a British-made bear from the 1930s. He was given to the aunt of one of Brighton Toy and Model Museum's managers circa 1939 and was then passed on to the manager’s mother sometime in the early 50s.

He has mohair fur, rags and wood wool stuffing and a broken growl. He growled profusely right up until the mid-eighties when he was played with by museum manager, Tigger’s eldest daughter, the third generation and fourth child to enjoy sharing secrets with his friendly face.

Buddy came to the museum in 2010 and has since visited several schools in Sussex as part of the outreach programme, taken tea at the Pavilion whilst on a visit to Brighton Museum and Art Gallery, attended the Meccano Lab launch in Calais, France and toured around Hollywood (including Warner Brothers studios where he sat in Scooby’s car and posed by a mock up picnic Yogi Bear style) and Santa Barbara.

This year he plans to visit Edinburgh, London and Brighton’s Sea Life Centre.