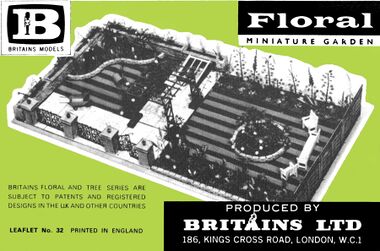 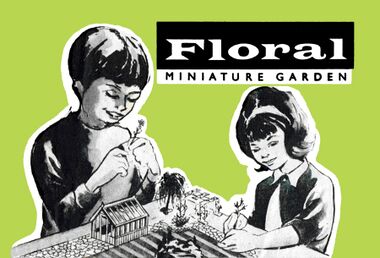 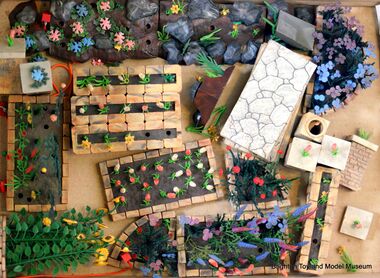 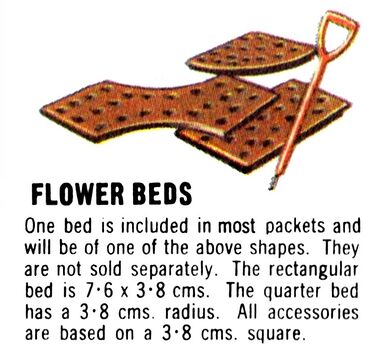 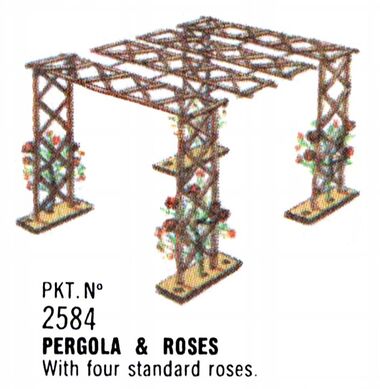 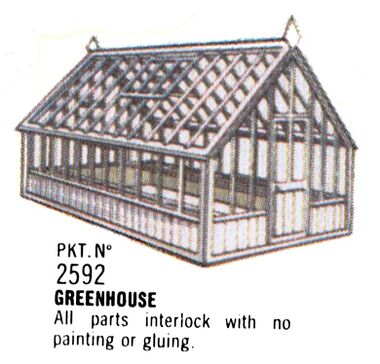 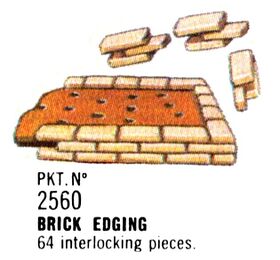 It's Back! Britain's Floral Garden returns to Brighton Toy and Model Museum!
The Museum has now finished building a lovely new BFG diorama, which is now on display

Britains Floral Garden (1960 - late 1970) was Britains' 1960s' reimagining of the earlier lead-based Britains Miniature Gardening range, redesigned to be manufactured in plastic. The range was designed and sculpted by the talented Roy Selwyn-Smith (1923-2006). 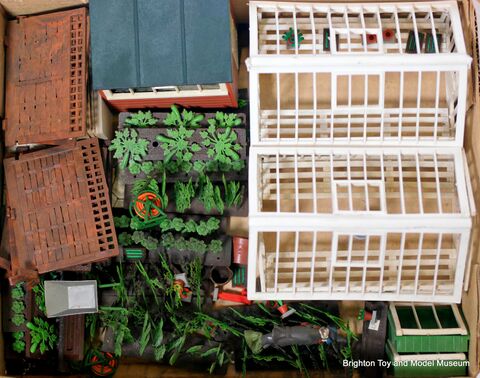 Greenhouses and Garden Shed. Note the starlike "radiating" greenery on the upper border, positioned and waiting to be "planted"

By using the miniature garden he can plan out his real garden in a thoroughly practical manner from the laying out of the flower beds, crazy paving paths, lawn, pergolas, etc., and filling it with a large yariety of plants in full flower, arranging and rearranging his design in miniature until a satisfactory one has been reached.

Mother will also want to have her turn with this versatile and beautiful construction set. As home decoration or table centres, all kinds of attractive effects can be devised; and without the trouble and expense of growing or using real miniature plants.

The ingenious housewife will devise many delightful ways of using these miniature flowers as cake decorations for those important occasions.

The Floral garden can go to work too. The perfect detail of these models will transform all kinds of architectural and other displays. They can be used in planning real horticultural exhibitions and large garden lay-outs for nurserymen who can submit them for their client's approval. As a shop window display for the seedsman or a special attraction in the gardening department of stores, the uses are innumerable.

Building up your garden

From a modest start with one flower packet (a small garden in itself) you can build your Floral garden into as large and varied model as you like with the various packets of flowers and accessories obtainable from your local stockists. The list on the back of this booklet shows the items in the present range but more will continually be added to the series.

You can make an endless variety of Garden layouts with this wonderful series. These box sets show some of the arrangements you can assemble but with a simple system of "one price" packets of flowers and accessories you can extend your garden to any size. With no painting or gluing it has a unique appeal to girls as well as boys and can be of great assistance in domestic and professional planning.

While the basic idea, range and designs were mostly closely based on the earlier 1930s lead range, the design of the flowers and flowerbeds needed rethinking. In the lead range, flowers had been cast and supplied flat, and the owner could then bend them into more realistic shapes. This idea didn't work in soft plastic, which wouldn't subsequently "take a shape" after moulding, and would tend to "bounce back" into its original shape given the chance. How could one recreate the dense internal detail and structure of a bush or branching plant in a way that was compatible with the demands of injection moulding?

The solution that allowed Britains to finally recreate a plastic version of Britains Garden was quite ingenious. Each plant was moulded as a flat "starlike" set of leaves and stalks radiating away from a central plastic "nub" in all directions. The "nub" was placed in a flowerbed planting hole, and a special "planting tool", whose shaft and handle were made to look like a garden spade, was then used to force the nub deeper into the hole. As the bottoms of the stems entered the hole, the radiating set of foliage suddenly bunched together at the base and perked up to form a spray of foliage, "springing to life" in a very satisfying manner. 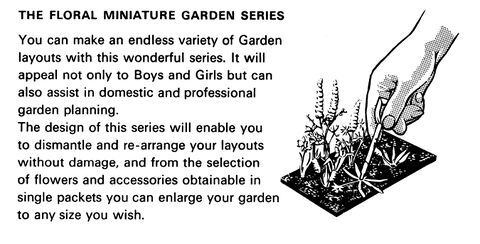 The lack of predictability for how this bunching happened added an extra degree of randomness to the plants, and if a stem or two occasionally broke off after repeated replanting, this added even more natural-looking variation to a flowerbed.

Where the earlier lead flowers had been painted, the new plastic versions used pre-coloured plastic, with the material's natural translucency adding more realism. Flower-heads were separately moulded in appropriately-coloured plastic, singly or in offset clusters, and push-fitted onto the stems by the user, which gave even more natural variation to the resulting plants.

Flowerbeds could be bordered by low brick walls composed of three staggered courses of flattened brick. In reality, these walls were made of Y-shaped triple-brick pieces that clipped together to form straight walls, or curves, or right-angle joints.

This was a brilliant idea for three reasons: the lack of strict locating points meant that the shape of the walls ended up with a natural-looking "rustic" variation, the use of a streaked mixture of plastics meant that there was a colour variation looking like stone, which was broken up at the Y-boundaries, making it look as if each brick was different (if the walls had been moulded as a single piece, the whole wall would share the same colour-variation and streaking and look less real) ... and thirdly, by having the user build the walls themselves, this added even more play value to the sets, and more of a sense of personal achievement at the sight of a finished garden. 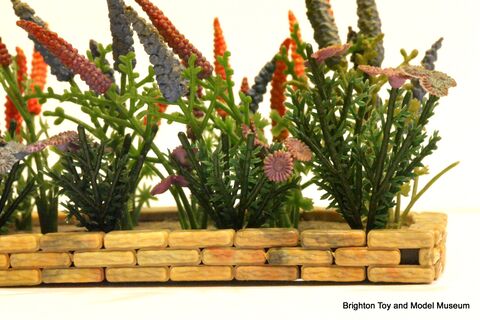 The way that the flowers "came alive" when planted enthralled many children, and while "Floral Garden" doesn't seem to have been a huge seller, it was so different from other toys of the period that owners who spent many happy childhood hours, planting and rearranging their plastic gardens are now fiercely loyal when it comes to any mention of the range, and there is a healthy second-hand market for the 1960s-produced parts and accessories.

The listing below is drawn from our collection of 1960s Britains catalogues. There maybe additional sets, or items not listed here that were "garden-y", but technically part of other ranges. 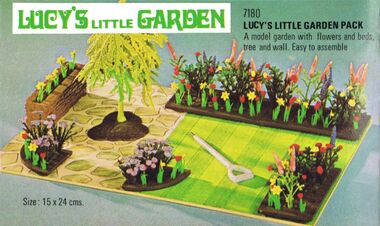 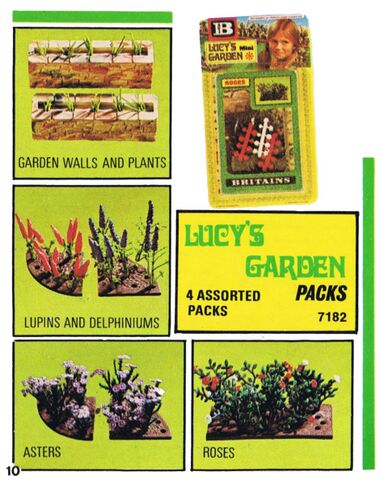 In 1976, an attempt was made at a limited relaunch of the Floral Garden range, renamed Lucy's Little Garden (a.k.a. Lucy's Garden / Lucy's Mini Garden), with a garden pack appearing in 1976, and extra accessory packs in 1977. However, these took up less than a page in the 1978 catalogue.

This can probably be seen as an attempt to follow the lead of other toy manufacturers who had rebranded old ranges in an attempt to "personalise" them, notably Tri-ang's renaming of the Spot-On Dollhouse furniture range as Jennys Home.

The following 90 files are in this category, out of 90 total.