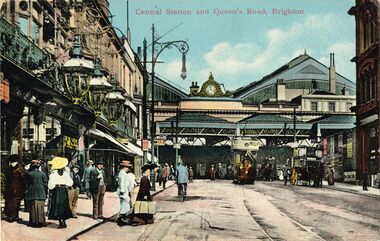 Looking at the frontage of Brighton Station, it seems natural that there should be a large open space in front for bus stops and so on. It's therefore slightly confusing to look at old photographs of the station approach and find this open space not existing. Queens Road ran up directly to the station, as a dead end, with no way for vehicles to turn left or right at the end of the road which then insisted on taking one over the bridge across Trafalgar Street.

The current open area populated by bus stops was originally occupied by the Terminus Hotel.

The LBSCR is supposed to have acquired the Terminus Hotel in 1877. However, trying to find reliable information on the subject online is difficult, and compounded by the fact that the LB&SCR appears to also have owned a different Terminus Hotel at the other end of the London-Brighton route, servicing London Bridge Station.

The National Archives website lists the location as "Acquired by Brighton CB from The Southern Railway Company for road improvements in 1923", with the contract for the road improvements going to Thomas Tilling Ltd. Demolition of the Terminus Hotel was carried out (/completed?) in 1924 and the open area further enlarged in 1935

Currently, the northernmost building on the West side of Queens Road is The Queens Head pub. This was apparently originally separated from the Terminus Hotel by another couple of houses, which were the subject of the additional 1935 demolition.