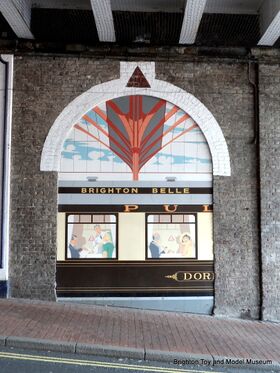 One arch of the mural [image info] 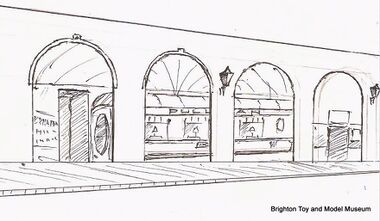 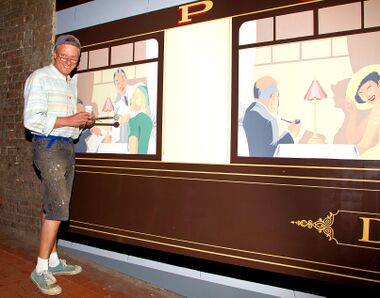 The mural extends over three of the four arches occupied by the Museum. It was designed by the Museum founder Chris Littledale, and painted by signwriter Terry Smith.

It was ceremonially unveiled in the latter part of 2010. 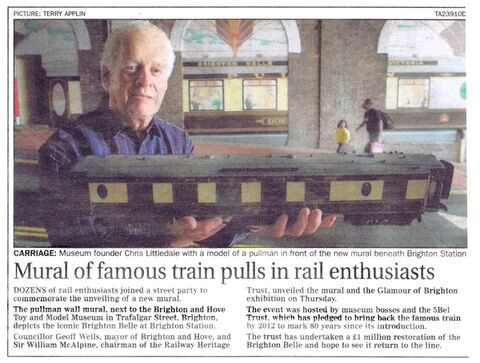 A Successful Night of New Beginnings

On Thursday 23rd September 2010, the Brighton Toy and Model Museum hosted a street party to celebrate a new milestone in its renaissance programme. The planned return of the iconic Brighton Belle all electric Pullman train was celebrated in style with the unveiling of a spectacular mural depicting a full-sized Pullman Car by the Chairman of the Railway Heritage Trust and Museum Patron Sir William McAlpine, and the new "Glamour of Brighton" exhibition within the entrance/shop area of the Museum by the Mayor of Brighton and Hove, Councillor Geoffrey Wells. Throughout the evening refreshments were served, a local jazz band entertained us, and the Museum was packed. The scattering of stardust was provided by Museum Director and Founder Christopher Littledale performing his magnificent LIVE special sound effects of many forms of transport including a Lancaster Bomber which sounded scarily realistic thanks to the acoustics under the bridge. With an attendance of over two hundred and fifty people, the event proved a successful night with everyone leaving with an experience they’ll never forget.