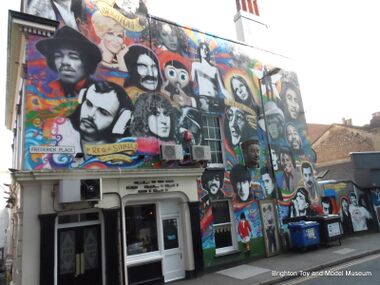 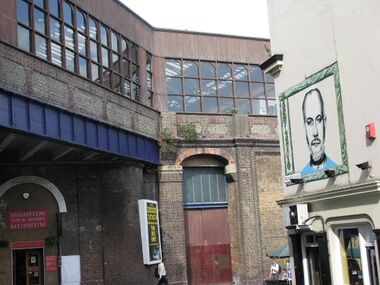 The previous mural of DJ John Peel watches over the entrance to Brighton Toy and Model Museum, 2011) [image info]

The mural appeared in the summer of 2013, and was replaced with an updated version in 2017.

The wall was previously known for its Banksy "Kissing Policemen" mural (which wasn't affected), and its mural of Radio One deejay John Peel.

The mural consisted of 28 images of deceased pop icons (plus Oliver Reed), in a variety of styles, mostly in monochrome, set against a vividly multicoloured background.

The two exceptions on the list are John Peel (who played music but didn't perform), and Oliver Reed (whose "performances" when inebriated frequently involved singing, but who was an actor by profession).