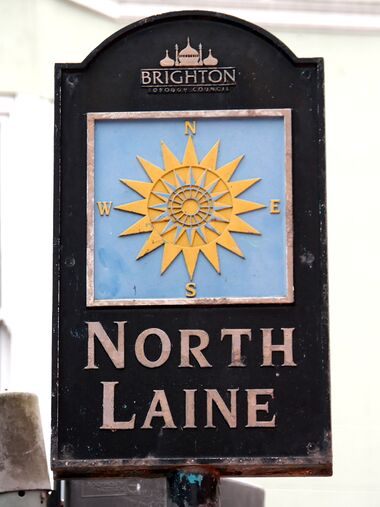 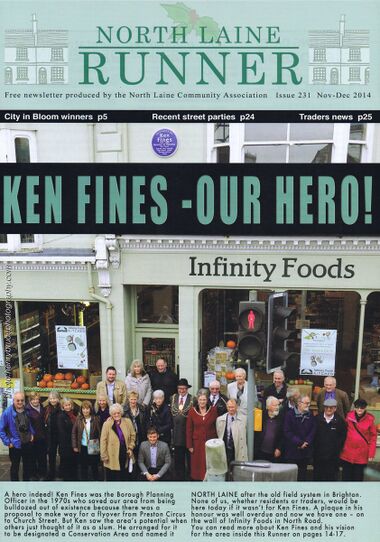 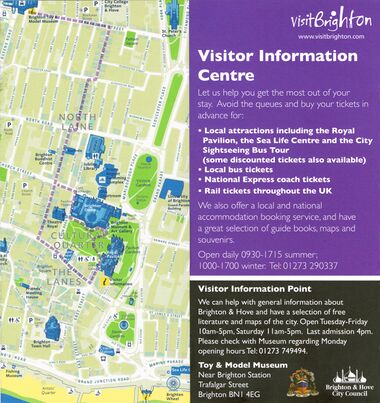 North Laine is a block of streets just North of central Brighton, with a range of shops reminiscent of London's Camden Town area.

It's bounded at the North by Trafalgar Street and Brighton Station, at the South by North Street, at the West by Queens Road and at the East by Valley Gardens and the Pavilion complex. It's known for its dynamic mix of shops, cafés and miscellaneous businesses, and for its disparate (and sometimes surprising) collection of building styles.

"Laine" is a pre-agricultural-revolution term for a divided field at the foot of a hill. Because of the foothill location, the field would be shared between multiple strip-farmers by dividing it into parallel strips of land that ran downhill, so that everyone would have a fair share of all the different types of land at the foot of the hill, with their different amounts of sunlight, soil types and drainage. Organising the strips to point up the gradient also helped with drainage.

When housebuilding in Brighton boomed after the opening of the London-to-Brighton line in 1841, the North Laine and the other fields around London Road were quickly built on, and in the case of North Laine this seems to have happened in a slightly haphazard fashion, with strips being bought and built on to create a narrow set of roads parallel to Queens Road whose layout reflected the layout of the original strip fields.

The piecemeal approach to building on the North Laine also created an impressively random set of architectural styles as people crammed small single-and multiple-storey buildings into the available space to produce a startlingly diverse set of structure whose only common overall theme was the obvious lack of any unifying vision or design.

The result of this unplanned building was an area that was widely regarded as a slum, but (as with London's Camden Town) the low rents then began to attract niche businesses and art- and fashion-related enterprises that would have had trouble meeting the larger rents of more "desirable" areas, and as the concentration of these businesses reached a critical mass, the area began to actively attract more businesses and became a valuable part of Brighton culture.

North Laine today keenly guards it reputation as a haven for "indie" shops and businesses, with a marked absence of conventional chain stores, and for its nice coffee shops and eateries.

The North Laine area was also arguably Brighton's main industrial area during the Nineteenth Century, and was home to the Regent Foundry and Eagle Foundry, as well as other miscellaneous "works".

You can enter North Laine from the Museum by walking down Trafalgar Street and turning right down any of the small streets on your right (Sidney Street is a recommended starting point). A map available from the Museum's Visitor Information Point gives a suggested walking route from the station, past the Museum, through North Laine and down to the Brighton Pavilion.