From The Brighton Toy and Model Index
(Redirected from Tractor)
Jump to:navigation, search 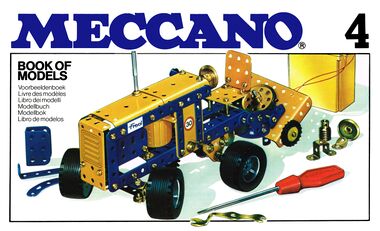 The word Tractor is usually understood to refer to general-purpose agricultural vehicles designed for off-road haulage and tasks such as ploughing. Tractors are designed for high grip and for the ability to haul heavy loads (or wrench free wagons stuck in ditches or mud, or miscellaneous farm jobs such as uprooting treestumps). They are designed for high torque at low speeds, and high traction.

The term is also usually only applied to agricultural machines that are powered by internal combustion engines burning petrol, diesel oil or some other oil-based fuel – the earlier incarnations of these machines, which were steam-powered, are typically referred to instead as traction engines.

The classic tractor design has a high-mounted seat or cab flanked by two very large drivewheels with heavy treads, and a pair of much smaller front wheels for steering, with a comparatively simple and exposed steering mechanism for easy servicing. Many modern tractors have an enclosed cab, but for small farms, the driver often needs to be able to hop on and off the tractor easily and doesn't spend a lot of time doing simple uninterrupted driving, making it more desirable to have just a simple driver's seat with a minimum of surrounding obstruction.

This form of colour-branding naturally tended to carry over to toys ... even for a fairly generic toy tractor, if the designer felt that tractors ought to be red, their idea of what a tractor ought to look like would probably have been influenced by the Fergusons, whereas if they felt that tractors looked more natural in blue, the personal experience that led them to that conclusion would also tend to lead them to design something that looked more like a Fordson.

Other types of "tractor"

The name "tractor" has also occasionally been used for other slow-haulage vehicles, such as military vehicles that might be needed for trenchwork, or the electric vehicles used at railway stations to haul luggage trolleys. Since a "tractor" is technically "a thing that pulls", some early aircraft designs were referred to as "tractor" meaning that they had forward-mounted propellors that "pulled" the aircraft, rather than rear-mounted props that "pushed" it.

The following 29 pages are in this category, out of 29 total.