A red Field Marshall Tractor (Dinky Toys 301) with silver detail and driver. The tractor also has a large exhaust along the side of the engine. Originally numbered 27n, but later changed to 301. The model was manufactured in 1953-65. 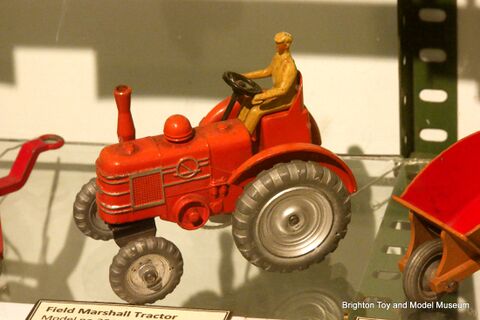 Gainsborough based agricultural manufacturers Marshall, Sons & Co. produced this range of single cylinder tractors from 1945-57. The tractors actually outlasted their original manufacturers, who became defunct and merged with John Fowler & Co. (Leeds) Ltd in 1947, when the company was renamed Marshall-Fowler Ltd. However the Field Marshall’s name was never changed to indicate the company merger.