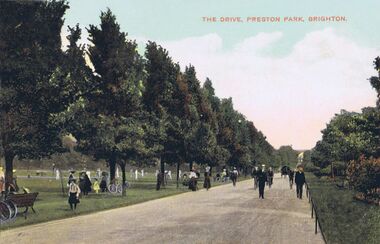 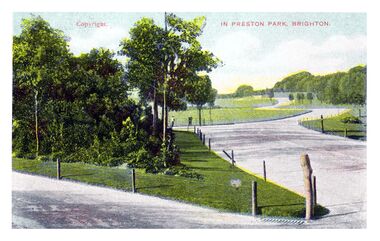 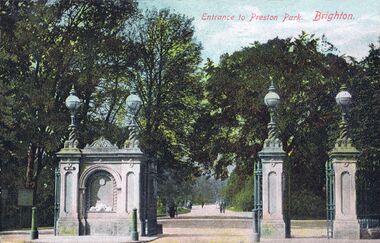 pre-1920s: Back when the Park had railings and gates [image info] 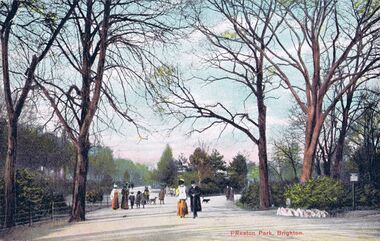 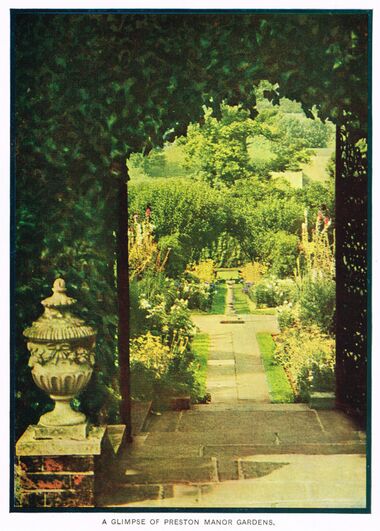 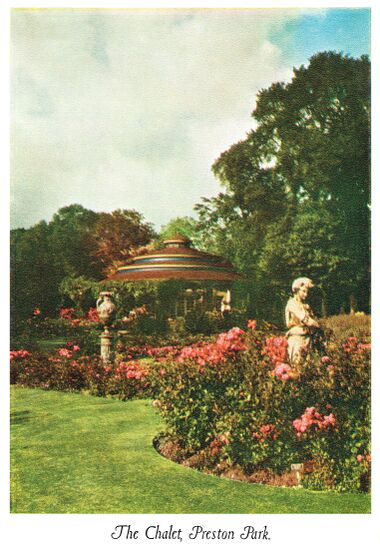 1939: "The Chalet" (actually the Rotunda Cafe), with part of the Rose Gardens in the foreground [image info] 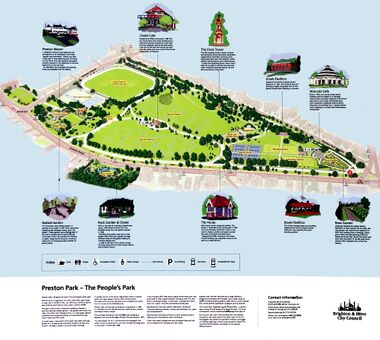 -2017: Preston Park map, edited from a photo of the park's public information board [image info] 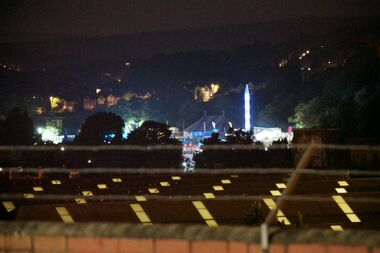 2018: The Britney Spears concert in Preston Park, seen from just over a kilometre away, from the embankment above Brighton Station. The stage area is out of sight, off to the right [image info] 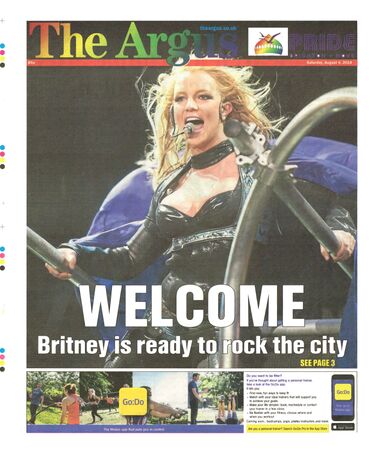 2018: The Britney concert announced on the front cover of the Argus, 4th August [image info]

Much of the park's unique character dates from after 1920, when Captain Bertie Maclaren took over and decided to reinvigorate the park with signature Rose Gardens and a range of new buildings and amenities.

A great deal of the park has now been restored to its peak 1920s/1930s condition (in the case of the Rose Gardens, perhaps even enhanced). An exception is the ornamental lanterns that used to mark the man entrance to the park - while the triple-dolphin supports still exist, they no longer support anything, the original globe-shaped lanterns having long gone.

One of Maclaren's biggest changes was to point out that since the park was a public space, and was alongside a road, and had its own pathway parallel to the road, there was no real reason why people should be prevented from walking straight off the pavement into the park wherever they liked. Insisting that people should only be able to enter and exit at official gateways, and should have to plan their stroll through the park around these and only these start- and end-points was pointlessly restrictive, and forced people to walk further to get into and out of the park.

Maclaren got rid of the railings, and the gateways. The dolphin lantern stands that had been above the gateways were kept, but ended up adorning low-walled arcs near the original gateways (the dolphin stands are still there, the lantern-glasses seem to have gone).

, the main portion of which is on the east side of Preston Road (the main thoroughfare to London), a small part called the Rookery being on the west side of the thoroughfare. Buses and trams bring this green and shady Park within a few minutes of the sea-front. A lofty viaduct on the Lewes branch of the Southern Railway spans the road just before the Park is reached. The Park, over 66 acres in extent, was purchased by the Corporation in 1883 at a cost of £50,000, and nearly £20,000 was expended in laying it out. A fine avenue skirts the park railings on the London road side, and renders the walk the pleasantest in the neighbourhood in hot weather. Provision is made for players of cricket, football, tennis, and bowls, and there is a cinder racing track. In the Rookery, across the London road, are public hard tennis courts. Equestrians have the use of one side of the Park, and their track is continued to the Downs. Cycling is allowed, and the Park is the scene of gymkhanas and similar events. There is a Pavilion near the cricket ground, with dressing-rooms for players and accommodation for spectators.

With 63 acres of parkland, this well loved open space plays a huge role in the life of the city, offering a variety of sports and activities and hosting many major outdoor events.

The park is also home to beautiful bedding schemes, a glorious restored walled garden, rose garden and many fine trees, two of which are Champion Elms. It also boasts several interesting and unique buildings including the Rotunda, Clock Tower and Tile House.

In recent years, many parts of the park have been restored as part of a 10 year project between Brighton & Hove City Council, Heritage Lottery Fund and English Heritage.

A regular winner of the Green Flag Award, given to quality parks and open spaces, Preston Park remains green throughout the summer because of an underground water source, known as the Wellesbourne.

Preston Park was bought by Brighton Corporation in 1883 for £50,000 from Mr William Bennett-Stanford who owned the Preston Manor Estate.

The purchase and layout costs (£22,868) were funded by a bequest from local bookmaker William Edmund Davies in 1879.

The park began life as a conventional Victorian park with walks, drives and plantations and was formally declared open to the public in November 1884.

Little changed until 1920 when Captain Bertie Maclaren was promoted to Parks Superintendent, bringing with him new skills in landscape design, construction, management and a vision for a light, colourful and family friendly park.

Railings were removed and tennis courts, bowling greens, lighting and a teas pavilion were introduced.

These new ideas changed the face of Preston Park and laid the foundations for the park you visit today.

Popular with families, the park has a large children's playground complete with sandpit, and a wide range of sports including bowling greens, eight tennis courts, football and cricket pitches, basketball courts and cycling facilities.

During your visit, don't miss the beautiful rock garden, situated on the other side of the main road. It's one of the biggest city-owned rock gardens in Britain and is full of twisted walkways, streams and wonderful plants. It is reputed that the design was based on the popular Willow Pattern.

— , -, , Text taken from the Public Information Board, Preston Park,

The existence of the park's comparatively open grassed central space (split by a central path) allows the park to be used with a temporary stage as an open-air festival music venue, and it is used as the main stage for the annual Brighton Pride festival.

Britney Spears used Preston Park as a venue to start the European tour of her Vegas "Britney – Piece of Me" tour. The concert was on 4th August 2018, to coincide with the annual Brighton Pride festival, and generated worldwide coverage. Other performers at the festival stage included Pixie Lott and Louise.

The following 38 files are in this category, out of 38 total.