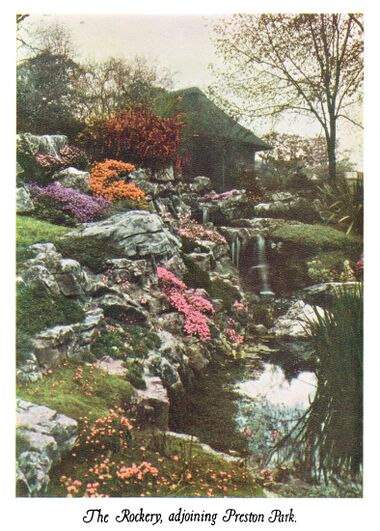 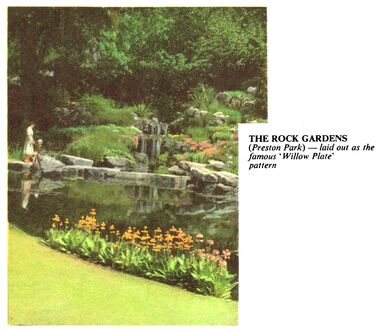 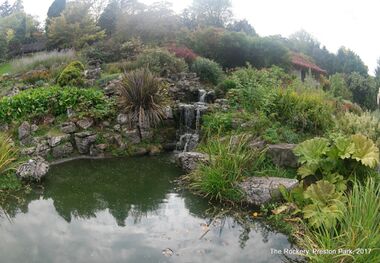 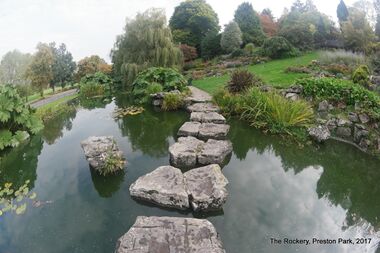 The steeply sloped Preston Park Rock Garden was constructed between 1934 and 1936, on a wooded area of land originally known as The Rookery due to the rooks that nested in some of the taller trees, but for obvious reasons tended to be referred to afterwards as The Rockery.

The rockery was built in the middle of the 1930s on a chunk of land on Preston Road opposite the main park, backing onto the railway line by Preston Park Station (which is at a much higher level). Access is only via the front of the park, on Preston Road.

The site is said to have previously been used as tennis courts, and since tennis courts need to be somewhat flat, this suggests that somewhere on the original site there must have been an extremely steep slope or even vertical buttressing. However, we've not seen any pictures of the site before the rock garden was built.

The garden is criss-crossed with an intricate and deeply complex network of paths and alternative routes that create alternative views at every turning, with a stream winding its way though the rocks and ending in pair of linked pools crossed by large stone block stepping-stones.

Overall, the garden's design, with its central embedded footbridge and small pavilion to the right, seems to be inspired by the "Willow Pattern" design associated with Chinese plates.

The garden was built by hand with 1350 tons of rough-hewn limestone blocks from the Cheddar Gorge, brought in from the railway line that conveniently runs adjacent to the highest part of the garden. It's been said that the Summer House was built using stone from the old police station at The Level, although this seems to be disputed.

Preston Rock Garden was built between 1934 and 1936 on a disused railway bank, and covers nearly a hectare (2.4 acres). During construction, a specially-made cutting was made into the top of the garden so the 1,350 tons of limestone imported from Cheddar Gorge in Somerset could be unloaded from the trains.

The garden opened on 5 May 1936 and included a "fine collection of over 3,000 alpine plants, shrubs and trees". It is often said that the design was based on the famous "Willow Pattern", but no reference to this was made during its conception.

The Rockery, or Rookery as it's often called, has seen many changes over the years but, in 2010, it was decided to make a major overhaul of the lower garden. This involved the removal of tired shrubberies and some of the trees which were too big for the area, and the planting of a vibrant range of spring flowering bulbs and large drifts of summer flowering herbaceaous perennials.

The waterfall was repaired and, in January 2013, the pond was drained to remove 155 tons of silt and re-fibreglass the entire structure due to a serious leak. Newly built marginal areas were also introduced to create a valuable refuge for baby fish, insects and other mini-beasts!

While the lower part is of high horticultural value, the top of the garden is left a little more wild, and visitors are encouraged to explore. A newly created wildlife area has been created in the area behind the chalet, which includes a hide for watching the many species of insects and birds that visit.