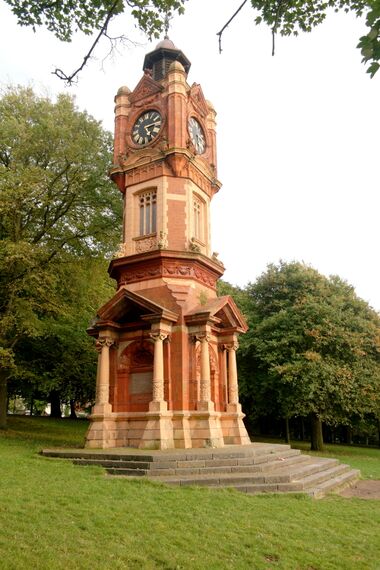 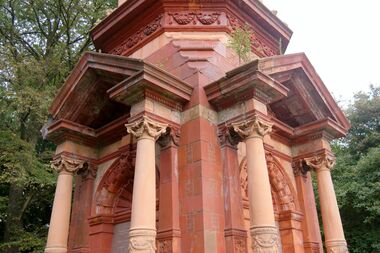 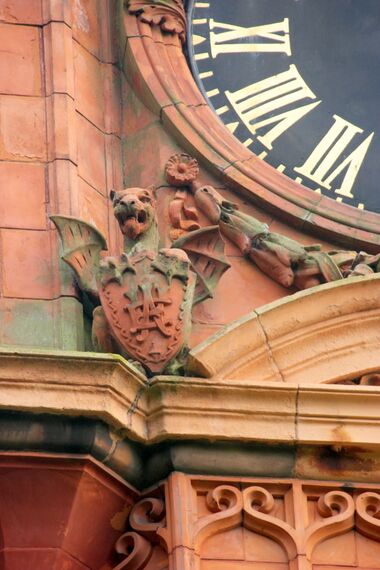 The terracotta Clock Tower in Preston Park had its foundation stone laid in 1891 and had its formal unveiling ceremony on 17th June 1892.

The tower was designed by Francis May, who said that he wanted it finished in terracotta because he felt that a more standard white marble tower, set in green fields and surrounded by trees, would look too much like a funeral monument. The tower was paid for by Edward White (whose initials EW adorn the tower), and the draughtsman for the plans was Eugenius Birch.

The front and side walls features a peaked portico with two pillars, in front of an inset arch with a semicircular top filled by a concave seashell. The back wall design is practically identical except that it's recess holds the tower's access door. The tower's pillars feature a recurring design of pairs of dolphins facing a pillar, which is repeated on the terracotta walls behind them.

The "first floor" is octagonal, with four screened windows, and is adorned with a carved cherub riding a dolphon at each of the eight corners.

The "second floor" reverts to a jutting squarish cross-section and holds the four circular black clock-faces, each lower-flanked by a pair of upright griffins holding a shield with Edward White's "EW" monogram.

Above the clock section is a small curved octagonal copper dome on top of an octagonal slatted ventilation section, all topped by a weather vane.

The tower's front carries a large section of granite engraved:

and has the white foundation stone at around ankle level, dated 1891.

The South face has a similar large granite panel reading:

BOROUGH OF BRIGHTON
This Tower and Clock were erected by
the munificence of Edward White Esqre. a
member of the Council of this Borough and
dedicated by him to the use of the public
on the Seventeenth day of June 1892
JOSEPH EWART M.D. Mayor.
Francis J. Tillstone
Town Clerk

, and there's another on the North face with an abbreviated version of the same information, and a listing of the members of the Recreation Grounds Committee, 1890-1891.