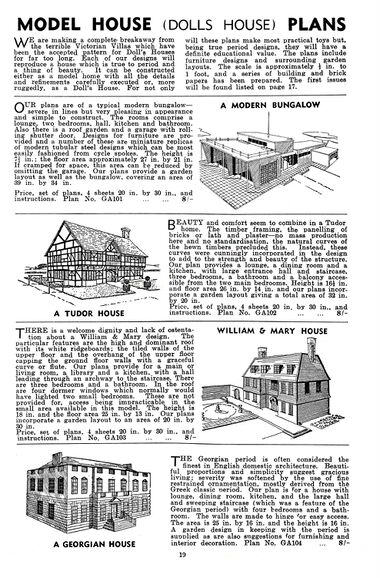 With Modelcraft producing plans for a range of wooden models, and with one of their most significant product lines being miniature patterned paper designed to look like tiling or brickwork (for the construction of model railways station and trackside buildings), it's probably inevitable that their attention would at some point fix on the main "traditional" use of miniature-patterned printed paper in modelmaking, wallpaper and external brickwork/slate pattern sheets for dollhouses.

Hobbies Ltd. had already shown that there was a market for dollhouse designs for people to build at home, and there was probably a significant overlap between Hobbies and Modelcraft customers

The designs in the 1951 Modelcraft List seem to show the company focusing on a limited range - a set of three 1:16-scale plans for a cottage, a bungalow, and an extension set to turn the bungalow into a two-storey house, all with sliding walls rather than the traditional hinged panels ("something new"), and a limited range of four houses each representing a markedly different period of architecture, Tudor, Georgian, William & Mary, and 1960s ultramodern.

Our plans are of a typical modern bungalow – severe in lines but very pleasing in appearance and simple to construct. The rooms comprise a lounge, two bedrooms, hall, kitchen and bathroom. Also there is a roof garden and a garage with rolling shutter door. Designs for furniture are provided and a number of these are miniature replicas of modern tubular steel designs which can be most easily fashioned form cycle spokes. The height is 7½in.; the floor area approximately 27 in. by 21 in. If cramped for space, this area can be reduced by omitting the garage. Our plans provide a garden layout as well as the bungalow, covering an area of 39 in. by 34 in.

Beauty and comfort seem to combine in a Tudor home. The timber framing, the panelling of bricks or lath or plaster – no mass production here and no standardisation, the natural curves of the timber precluded this. Instead, these curves were cunningly incorporated in the design to add to the strength and beauty of the structure. Our plan provides a lounge, a dining-room and a kitchen, with large entrance hall and staircase, three bedrooms, a bathroom and a balcony accessible from the two main bedrooms. Height is 16½ in. and our plans incorporate a garden layout giving a total area of 32 in. by 20 in. 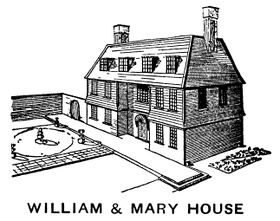 There is a welcome dignity and lack of ostentation about a William & Mary design. The particular features are the high and dominant roof with its white ridgeboards; the tiles walls of the upper floor and the overhang of the upper floor capping the ground floor walls with a graceful curve or flute. Our plans provide for a main or living room, a library and a kitchen, with a hall leading through an archway to the staircase. There are three bedrooms and a bathroom. In the roof are four dormer windows which normally would have lighted two small bedrooms. These are not provided for, access being impracticable in the small area available in this model. The height is 18 in. and the floor area 25 in. by 13 in. Our plans incorporate a garden layout to an area of 20 in. by 30 in.

The Georgian period is often considered the finest in English domestic architecture. Beautiful proportions and simplicity suggest gracious living; severity was softened by the use of fine restrained ornamentation, mostly derived from the Greek classic period. Our plan is for a house with lounge , dining room, kitchen, and the very large hall and sweeping staircase (which was a feature of the Georgian period) with four bedrooms and a bathroom. The walls are made to hinge for easy access. The area is 25 in. by 16 in. and the height is 16 in. A garden design in keeping with the period is supplied as are also suggestions for furnishing and interior decoration. 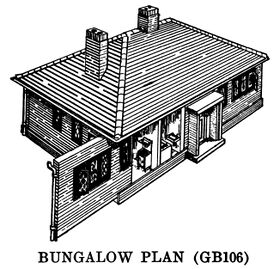 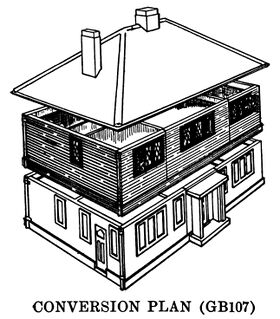 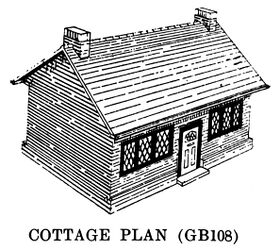 Here is something new in the way of Dolls' House plans which will give as much pleasure to the doting parent as to the lucky child for whom he builds it. There are three plans, GB106 builds the bungalow and GB107 turns the bungalow into a two-storey house. (Please note that the atter is an auxiliary plan and can only be used in conjunction with GB106.) GB108 is a simple type of plan of a Doll's Cottage and is an ideal subject for those who are new to the fascinating pastime, or are restricted by lack of space. The designs are clear and modern yet not hard to construct. All rooms are accessible by sliding panels – a real improvement on the old hinged walls, which always gave trouble, and all the little refinements which are always looked for in a Doll's House are provided for. Scale 3/4 in. to 1 ft.