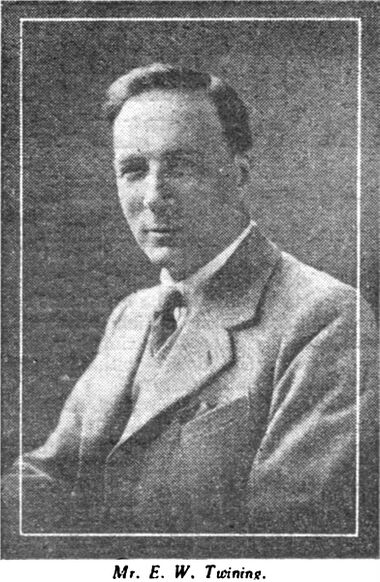 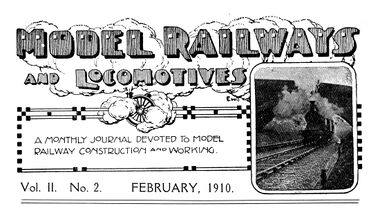 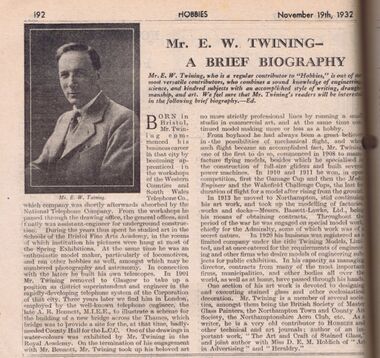 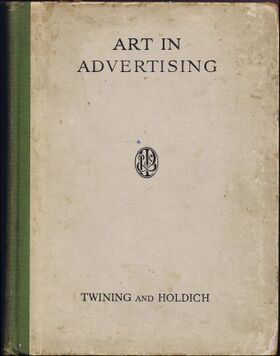 "Art in Advertising: A treatise on artists' work in connection with all branches of publicity", E.W Twining and Dorothy E.M. Holdich (Pitman, 1931) [image info]

Ernest Twining (1875 - 1956) (a.k.a. E.W. Twining) was a prolific artist, modelmaker and model engineer with an intimidating range of interests and areas of expertise, ranging from fine art to aeronautics, and writing books on stained glass (1928), commercial art (1931), and indoor model railways (1937).

Twining's family's commercial background in Bristol was was stained glass, so his early training was in art and stained glass design. He then trained as a telephone engineer, which brought him into contact with other engineering-minded colleagues, and became interested in flyable model aircraft, although he seems to have kept in contact with art establishments.

Although winning a prize in a technical model aircraft competition may not sound so impressive nowadays, at the time, aircraft modelling was a strong influence on aircraft engineering, and so to win a prize for a model aircraft's performance was somewhat impressive, given that there would have been some serious engineering competition. The idea that these were not just toys is borne out by Twining's later decision to start designing, manufacturing and selling kits for full-size aircraft.

His telephone engineer circles brought him into contact with Mary Davies (who he married), and Mary's son Cuthbert was apprenticed to Henry Greenly, and then joined Ernest in the Twining Aeroplane Company, which started out making model aircraft and kits but then graduated to functional full-size manned aircraft kits.

Twining's aeronautical enterprises didn't take off as hoped, and Cuthbert started spending more time on motorcycle repairs, with Ernest heading to Northampton to make architectural models for Bassett-Lowke. Twining seems to have intended to produce a wider range of models, but the demand for exhibition models kept his company busy - the obvious quality and impact of the company's exhibition models didn't just promote the products and projects of the client companies, they also showcased how much interest could be generated with a really good really good exhibition model, and attracted the attention of other companies who wanted something similar for their own stands.

Twining's relationship with Bassett-Lowke was so close that Ernest seems to have created at least some of B-L's distinctive catalogue covers and artwork, which show strong Art Nouveau and Art Deco influences, and some of whose covers - with strong outlines and heavy shading - are quite reminiscent of stained-glass designs.

Twining spent WW2 working as a draughtsman at the Bristol Aircraft Company, and after the war, damage to churches and cathedrals resulted in a demand for replacement stained glass that Twining could supply, taking Ernest all the way back to his original roots as an artist working with ornamental glasswork.

Mr E. W. Twining, who is a regular contributor to "Hobbies", is one of our most versatile contributors, who combines a sound knowledge of engineering, science and kindred subjects with an accomplished style of writing, draughtsmanship, and art. We feel sure that Mr. Twining's readers will be interested in the following brief biography – Ed.

Born in Bristol, Mr Twining commenced his business career in that city by becoming apprenticed in the workshops of the Western Counties and South Wales telephone Co., which company was shortly afterwards absorbed by the National Telephone Company. From the workshops he passed through the drawing office, the general offices, and finally was assistant-engineer for underground construction. During the years thus spent he studied art in the Schools of the Bristol Fine Arts Academy, in the rooms of which institution his pictures were hung at most of the Spring Exhibitions. At the same time he was an enthusiastic model maker, particularly of locomotives, and ran other hobbies as well, amongst which may be numbered photography and astronomy. In connection with the latter he built his own telescopes. In 1901 Mr. Twining removed to Glasgow to take up a position as district superintendent and engineer in the rapidly-developing telephone system of the Corporation of that city. Three years later we find him in London, employed by the well-known telephone engineer, the late A.R. Bennett, M.I.E.E., to illustrate a scheme for the building of a new bridge across the Thames, which bridge was to provide a site for the, at the time, badly-needed County Hall for the L.C.C. One of the drawings in water-colours was exhibited by Mr. Twining in the Royal Academy. On the termination of his engagement with Mr. Bennett, Mr Twining took up his beloved art on more strictly commercial lines by running a small studio in commercial art, and at the same time continued model making more or less as a hobby.

From boyhood he had always been a great believer in the possibilities of mechanical flight, and when such flight became an accomplished fact, Mr Twining, one of the first to do so, commenced in 1908 to manufacture flying models, besides which he specialised in the construction of full-sized gliders and built several power machines. In 1910 and 1911 he won, in open competition, first the Gamage Cup and then the Model Engineer and the Wakefield Challenge Cups, the last for duration of flight for a model after rising form the ground.

In 1913 he moved to Northampton, still continuing in his art work, and took up the modelling of factories, works and docks – Messrs. Bassett-Lowke Ltd., being his means of obtaining contracts. Throughout the period of the war he was engaged on special model work, chiefly for the Admiralty, some of which work was of a secret nature. In 1920 his business was registered as a limited company under the name Twining Models, Limited, and at once catered for the requirements of engineering and other firms who desire models of engineering subjects for public exhibition. In his capacity as Managing Director, contracts from many of the most important firms, municipalities, and other bodies all over the world, as well as at home, have passed through his hands.

One section of his art work is devoted to designing and executing stained glass and other ecclesiastical decoration. Mr Twining is a member of several societies, amongst them being the British Society of Master Glass Painters, the Northampton Town and Country Art Society, the Northamptonshire Aero Club, etc. As a writer, he is a very old contributor to HOBBIES and other technical and art journals; author of an important work, "The Art and Craft of Stained Glass", and joint author with Miss D.E.M. Holdich of "Art in Advertising" and "Heraldry".

As well as numerous articles in publications such as Hobbies Weekly (which in HW seem to be uncredited!), Twining wrote, co-wrote or illustrated a significant number of books: