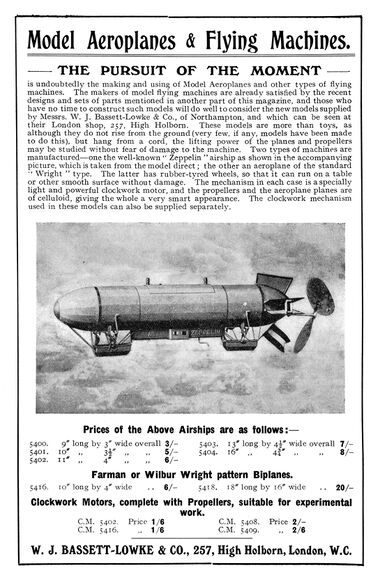 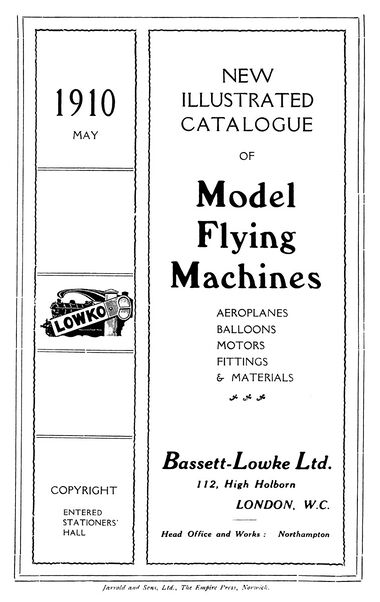 One of the oddities of the Bassett-Lowke Ltd. range was the apparent absence of Bassett-Lowke aircraft from many of their catalogues - Bassett-Lowke certainly produced lots of model locomotives, many ships (W.J. Bassett-Lowke was a ship enthusiast), the occasional steam road vehicle (W.J apparently wasn't keen on cars), but an apparent complete lack of model aircraft. This seems all the more surprising since one of the key B-L team members, Ernest Twining, had a background specifically in model aircraft design - Twining had started his own model plane business, won a model aircraft engineering prize, and had even been trying to branch out into producing kits for full-size people-carrying aircraft before joining the Bassett-Lowke "family" in Northampton.

The key to this apparent omission seems to be contained in a Bassett-Lowke 1910 catalogue dedicated to model aircraft, an almost forgotten catalogue that seems to have been produced so rarely that the first release, in May 1910, might even have been a one-off (there might have been subsequent issues, but we haven't seen them).

" THE PURSUIT OF THE MOMENT ... is undoubtedly the making and using of Model Aeroplanes and other types of flying machines. The makers of model flying machines are already satisfied by the recent designs and sets of parts mentioned in another part of this magazine, and those who have no time to construct such models will do well to consider the new models supplied by Messrs. W.J. Bassett-Lowke & Co., of Northampton, and which can be seen at their London Shop, 257, High Holborn. These models are more than toys, as although they do not rise form the ground (very few, if any, models have been made to do this), but hang from a cord, the lifting power of the planes and propellors may be studied without fear of damage to the machine. Two types of machines are manufactured – one is the well-known "Zeppelin" airship as shown in the accompanying picture, which is taken from the model direct; the other is an aeroplane of the standard "Wright" type. The latter has rubber-tyred wheels, so that it can run on a table or other smooth surface without damage. The mechanism in each case is a specially light and powerful clockwork motor, and the propellors and the aeroplane planes are of celluloid, giving the whole a very smart appearance. The clockwork mechanism used in these models can also be supplied separately. "

We're guessing that this catalogue and product range was probably the brainchild of Twining – it's aimed squarely at the hardcore model aircraft maker in an age when model aircraft design was not about toys, but was actually playing a part in developing systems, designs and configurations that were likely to end up on real aircraft. Bearing in mind that the first Wright Brothers flight had only been achieved around seven years earlier in in 1903, the aircraft modeller was recreating working aircraft craft that were at the scientific cutting edge, in miniature.

Since much of the development of early aircraft was happening in France, the catalogue acknowledges that much of the contents of its pages – the kits, designs and very specialised materials – are imported from France.

" In submitting this, the first of our Lists devoted to Model aviation, we claim, as in our other departments, to offer to the public something different in the way of Model Flying Machines. The Model Aeroplanes we catalogue are more to scale than, as yet, has been attempted, but like our Model Locomotives, they are also real working replicas of their respective prototypes.

Although we always endeavour to offer British goods to the British, we recognise that in science of Aviation our continental friends, at the time of writing, are somewhat in advance of us, and we therefore have not restricted this List in any way; we supply the best products of both France and England. "

It's not too difficult when skimming the catalogue to work out why the venture might not have been a complete success. A lot of the materials are very specialised and probably not of interest to anyone but model aircraft builders, the designs were (necessarily) based on the very earliest full-scale flying machines, many of the specialised parts range in price from the expensive to the very, very expensive, and some components are presented apparently in the hope that someone out there, somehow, might be able to make some sort of aircraft out of them.

Another clue lies with the fact that so much of the product line was French - while enthusiasts in France might have had a thriving community, in England , working aircraft modellers were probably few and far between, and there may simply not have been enough of them to sustain a viable B-L range.

Having tried to pioneer model aircraft in the UK as an "early adopter" (and perhaps had their fingers burnt in the process) B-L seems to have been hesitant to get too deeply involved in the subject again, even in later years when model aircraft did become a popular hobby, and as a result, other companies like International Model Aircraft and their FROG range ("Flies Right Off Ground") ended up dominating, despite B-L's early lead.