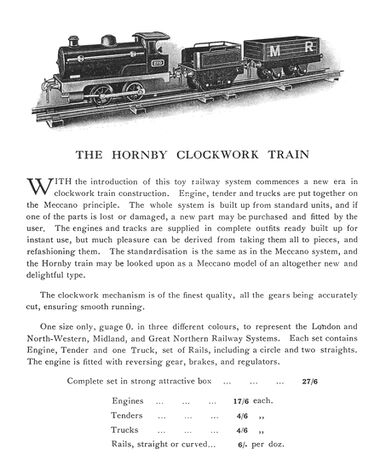 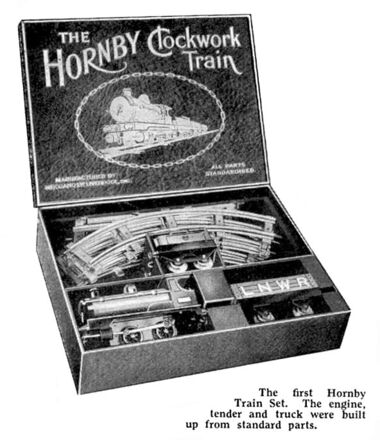 A historically-important early locomotive and tender for The Hornby Train Set (1920), reckoned to be the first "proper" train that Hornby ever produced. It was available in red, green or black.

This locomotive (numbered 2710) was the predecessor of the Hornby No.1 Loco, and the ancestor of Hornby's entire enamelled range of locos.

The train was designed along "constructional" lines, held together with Meccano nuts and bolts, and built of parts that could be taken apart and reassembled, Meccano-style. The idea that users could build a variety of different specialised vehicle models from a single set of parts (which were Meccano-compatible wherever possible) so that a model train could be taken apart and reassembled into different configurations probably seemed quite attractive, apart from the fact that once you'd disassembled the Hornby Train, there wasn't an awful lot that you could do with it apart from reassembling it almost exactly the way that it came. However, the company later used the same idea more successfully the Meccano Aeroplane Constructor Set and the Meccano Motor Car Constructor outfits.

If Meccano had sold a range of alternative chimneys or tender parts then the evolution of the Hornby Train might have been different, but the fixed chassis lengths for the loco and tender meant that if the final models were not going to be riddled with spare holes, customisation options were always going to be limited, short of replacing the entire superstructure.

Meccano's "new era in clockwork train construction" didn't last very long, as Meccano quickly decided that the constructional aspect of the model railways was going to be the process of assembling locos and carriages to form trains and track sections to form layouts, rather than building the individual pieces, and the No.1 loco that replaced the original "Hornby Train Set" loco was no longer disassemblable.

However, the Hornby Train was still arguably a success, in that is met its design brief of creating a new design of Hornby clockwork train that could be easily distinguished and differentiated from the Continental tinprinted locomotives ... although the differentiation turned out to be the chunky construction and enamelled finish, rather than the "Meccano" aspect. Possibly as a fallback model, Meccano also launched a cheaper and more conventional tinprinted toy train, but although this had more (printed) detail, it was the simpler and more expensive-looking enamelled Hornby loco that customers liked.

The aspect of The Hornby Train that most perplexes model railway enthusiasts is the use of additional shiny brass buffers between the locomotive and tender, which was something that did not happen on real railways. However, since this was in many ways an experimental product, the use of buffers allowed children to play with the loco and carriages without the tender (not caring about the impossibility of such a thing in real life), and since Meccano buffers were a removable component, it may have seemed sensible to throw in an additional four buffer pieces to stress the constructional aspect, and leave open the option of supplying the locos without tenders.

" With the introduction of this toy railway system commences a new era in clockwork train construction. Engine, tender and trucks are put together on the Meccano principle. The whole system is built up from standardised units, and if one of the parts is lost or damaged, a new part may be purchased and fitted by the user. The engines and tracks are supplied in complete outfits ready built up for instant use, but much pleasure can be derived from taking them all to pieces, and refashioning them. The standardisation is the same as in the Meccano system, and the Hornby train may be looked upon as a Meccano model of an altogether new and delightful type. "