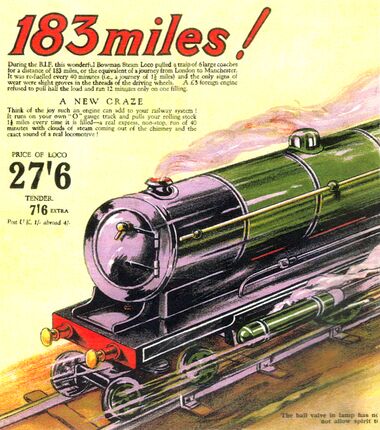 >1928: "183 Miles!!" Artwork from Bowman Models commemorating the performance of a steam-powered model locomotive at the 1928 British Indisustries Fair [image info] 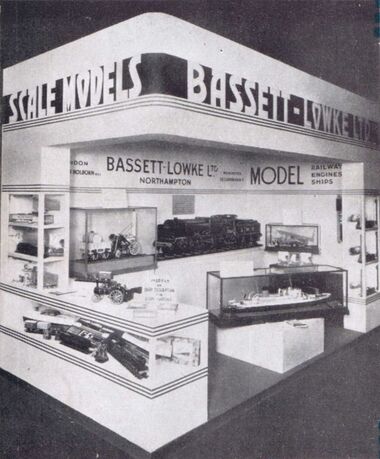 Trix Manyways display at the British Industries Fair, in 1938 or 1939 [image info] 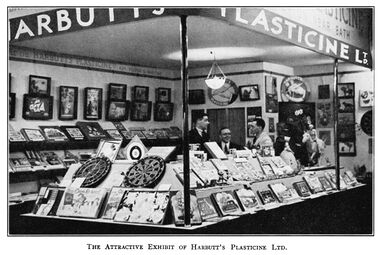 The Fair was apparently partly the brainchild of the Birmingham Chamber of Commerce, who wanted Birmingham to be the "shop window" of Britain in the same way that the Leipzigger Messe promoted German trade and exports.

With the outbreak of WW1 Germany was now officially the enemy, and the Department of Trade was looking for ways to use the economy as an additional "front", the plan being to leverage the absence of German products during the War and persuade British businesses to enter markets that would have previously been dominated by German companies, the hope being that if the Fair could "kick-start" these new homegrown businesses, they'd be sufficiently established after the war finished to be able to compete with German industry.

Having decided that holding the Fair was a matter of urgency, the Birmingham Chamber of Commerce faced the doubtless disappointing decision that from 1915 the Fair would be held in London while Birmingham built sufficient infrastructure to be able to host it. Once the new Exhibition centre opened in Birmingham in 1920, the precedent had already been set for holding the Fair in London, leading to an odd compromise where the Fair was "split", with different parts being held in both cities at the same time.

The British Industries Fair and the toy industry

Since the fair was reliably held every year, it was a natural choice of value for large toy companies who had something new to promote each year, and Bassett-Lowke, Meccano Ltd. and Lines Brothers ended up making it part of their yearly schedule. Lines Brothers in particular used the 1920 British Industries Fair to launch and promote their new company (which they'd founded in 1919) and to build up a healthy advance order-book to get their business started.

As a matter of fact there’s one quite interesting thing which was a great pity, he was one of the Board of Directors of the British Industries Fair and the toy industry in the immediate post war years used the British Industries Fair as the toy fair, yearly toy fair, and my father – pressed the what was then called the British Toy Manufacturer’s Association to start up their own show, their own fair, and to make it international and unfortunately the industry said ooh we don’t want to let a lot of Germans in, and they made it British only and it was the biggest mistake the industry has ever made. Because the Germans said to themselves we will have a toy fair and we’ll make it international and they started Nuremberg and Nuremberg became the world’s number one toy fair and if we’d done it in time which we could have we would have had that – we didn’t. It was a great great great shame that.