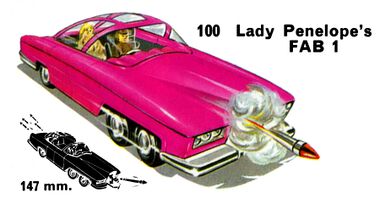 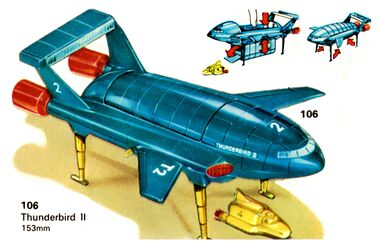 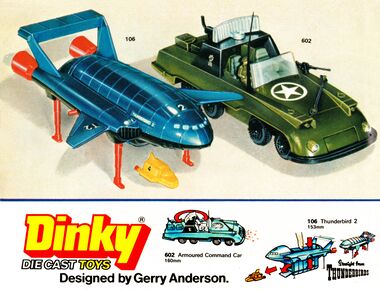 Thunderbirds (1964-1966) was a much-loved children's TV series produced by Gerry Anderson and Century 21.

Thunderbirds used marionettes for its human characters, but the real stars of the show were the imaginatively designed futuristic sets and vehicles.

The premise of the show was that the wealthy Tracey family secretly ran an organisation called International Rescue from their island base. The island featured hidden underground silos from which the various rescue craft would emerge as required. Emergencies often featured futuristic industrial complexes or craft in trouble, which would need complicated rescue procedures. To add some variety to the plots, a villain known as The Claw was also intent on stealing the Thunderbirds technology, and would sometimes deliberately cause disasters to force the Thunderbirds craft to be called to the scene.

A range of more specialised vehicles carried in the pods (such as the Mole tunnelling craft) didn’t have assigned numbers. Another notable vehicle was the machinegun-equipped pink six-wheeler Rolls-Royce driven by Thunderbirds associate Lady Penelope.

The success of the two series of Thunderbirds led to the series being shown again and again on Saturday mornings, and in the 1990s Matchbox produced a model of Tracey Island, and a presentation of smaller-scale Thunderbirds vehicles that could be stowed in it.