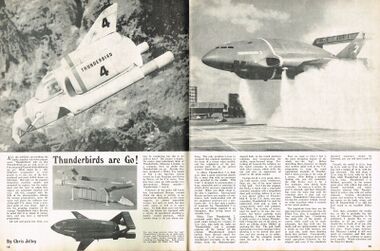 The Dinky Toys 101 Thunderbird 2 model was soon replaced with a slightly larger redesigned version, which had a larger body and pod, and the new catalogue number 106.

A WORD of advice – never make the mistake of thinking that you know everything. For the past six or so years I have been reviewing all new Dinky Toys for the Meccano Magazine and, in this time, I have seen so many innovations, gimmicks and new models, and have seen the die-cast modelling world as a whole make so many advances in design and manufacture that I had come to imagine I had seen just about everything. Nothing in this field. I thought, could surprise me – then along came Fab 1!

Fab 1, or to give it its official title, "Lady Penelope's Fab 1", is the new Dinky model of the futuristic car owned by "Lady Penelope Crighton-Ward" and driven by "Parker" of the television puppet series "Thunderbirds" (you must have heard of International Rescue!) It is, in my opinion, by far the best and most amazing toy ever to have appeared in the Dinky range or, for that matter. in any comparable range. It is, however, primarily a toy, a fact which I must stress to quiet the mutterings of serious scale model collectors, but it is a toy only because its prototype does not exist in real life. In all other respects, it's a top-quality, solidly-built model and is certainly an exact replica of the T.V. original. In fact, it's made by Dinky for Century 21 Toys Ltd., the 'owners' of the original.

But the simple fact that the new Dinky originated in a T.V. programme is a comparatively minor detail. Of far greater importance from the customer's point of view is the question, "What special features does it have to recommend it?" Answer — "Plenty!"

Regular "Thunderbirds" viewers will have noticed that, besides its unusual general shape, the television show's Fab 1 has to unique features: twin front wheels and transparent "bubble" roof. Both these features appear on the Dinky version. The canopy, itself, slides open and closed and covers a gold-plated highly-detailed interior containing, like the original, an instrumented dash-board and a centrally-mounted steering wheel in front of a single driver's seat. Behind this is a full-width passenger seat and that isn't all! Two scale figures are included, a liveried chauffeur, unruffled, in the driver's seat and an elegant lady in full evening dress with "fur" jacket sitting sedately in the passenger seat. Believe it or not, these figures actually look just like Parker and Lady Penelope! How's that for reproduction!

Other points of note are TRIPLE jewelled headlamps, suspension, "FAB 1" number plates and authentic pink gloss finish. Overall, the model is a big 5 11⁄16 in. long by 2 1⁄10 in. by 1 1⁄2 in. high and, as a matter of interest, weighs more than ½lb. which is surely proof of its substantial nature.

When arming the model, i.e. fitting the rocket and harpoons, the model should be placed on a rigid surface such as a table or the floor and care should be taken that it is not pressed down while the rocket, etc. is being pushed home. The radiator, itself, acts as a sort of safety device and, as such, should always be in the correct upright position except when the rocket is being fired. If you follow these "rules" you'll find that you can have great fun with the model for hours on end without any trouble. ...

What might be a 'silly children's programme' to some people is, to me, one of the best-produced and most skilful shows on television. Not only are the puppets themselves excellent models and animated by experts, but the equipment and the 'sets' in which they appear are amazingly detailed and real.

All this, coupled with the skill of the photographers filming the various programmes, raises the series well above the ordinary run-of-the-mill T.V. show, from a technical point of view alone. Add to this the gripping suspense of the average Thunderbirds story, bearing in mind that it is aimed at youngsters, and you have a top-notch programme.

All well and good, but what, you may be wondering, has this to do with us here? The answer is simple. No matter what individuals think of Thunderbirds, Meccano Limited, as a company, have no doubt that Thunderbirds are go. Already they have produced a Dinky Toy model of Fab 1—the futuristic vehicle owned by Lady Penelope and driven by Parker—of the T.V. series. Now they have come up with another two International Rescue specials — Thunderbirds 2 and 4.

Followers of the series will know that International Rescue, around which the show is written, is an organisation dedicated, as the name suggests, to almost impossible rescues, not only on land, but also under water, as well as in outer space. To help them carry out their tasks, the heroes are equipped with a variety of specialised machinery, mostly rocket - powered, which enables them to do just about anything. The only problem is how to transport the required machinery to the scene of a rescue when needed, and the originators of the programme have hit on the perfect answer — Thunderbird 2!

In effect, Thunderbird 2 is little more than a giant motorised chassis like a space ship with an enormous hole punched in the middle. This 'hole' is designed to accommodate a huge, removable pod or container in which all the necessary equipment is carried. When you think about it, the idea is ingenious. International Rescue can have any number of containers, each ready-loaded with all the equipment necessary for a particular job. It is then only a matter Of moments for Thunderbird 2 to Pick up everything required in an emergency, thus saving hours of valuable time.

Dinky Toys Thunderbird 2, marketed under Sales No. 101, is made under licence for Century 21 Toys Ltd., who hold the rights on 'Thunderbirds', and it certainly captures all the 'action' of the original. Manufactured almost entirely from die-cast metal for strength, it is of course, an exact reproduction externally on the prototype, from the 'flattened-cigar'-shaped body to the raised platform tailplane, and incorporating the stubby, swept-forward wings. Protruding aft beneath the tailplane are the rocket exhausts, in red plastic with silver inserts, which strike the eye and give an appearance of power to the whole model.

Casting detail is very good, showing body panels, rivets, windscreen, flaps, etc., but of far more interest is the 'pod'. Yes! Like the original, the Dinky is fitted with a removable container complete with a drop-down door and carrying, believe it or not, a tiny plastic replica of Thunderbird 4! In the T.V. show, you may remember, Thunderbird 4 is used for underwater work and, as such, is comparatively small and compact. The Dinky Toy version, of course, must be small to fit into the container, but before anybody starts complaining, I should explain that it really comes as a bonus, Thunderbird 2 being the star of the piece, so don't go talking about 'fiddles' or anything like that. The pod, itself, incorporates two free-running rollers, allowing it to be moved into position and also serving as an undercarriage for the complete model when the pod is in place in the aircraft.

Now we come to what I feel is the most intriguing feature of the whole toy -- the 'legs'. Before describing them, however, we should take another quick look at the T.V. programme to recap the usual operational methods of Thunderbird 2 when arriving at the scene of a rescue. After finding a suitable landing site, you will remember, the ship hovers over it for a few moments, then slowly lands vertically. As soon as it settles, the pod is released, and four telescopic legs raise the main ship until the container door is clear and can open. Thunderbird 2 then takes off, leaving the container behind, except on some occasions when it remains in the raised position.

The important items here are the legs and I am pleased to say that the Dinky Toy, also, is equipped with four retractable legs. Considering the small size of the model, of course, these could not be made telescopic, but they fold into the body, and are spring-loaded, so that a touch on two little buttons, one at each side, sends them shooting down into position. Consequently, it is possible to reproduce almost the exact operations followed by the original and even if the absolutely identical sequences cannot be followed, you can still have loads of fun.

This, then, completes the model, but, as this is probably the last issue of Meccano Magazine to be published, I should like to say goodbye to all my readers and should like to thank all of you who have written to me over the past few years. Don't forget, however, that Meccano Limited is still very much in existence, and that new Dinky Toys will continue to appear every month. Watch television and the Press for details.

The two large pictures show the 'real' Thunderbird 4 diving on an underwater mission, and Thunderbird 2 (the subject of the Dinky model) hovering before extending its Landing legs. Both photos are copyright AP Films Ltd. 1966.