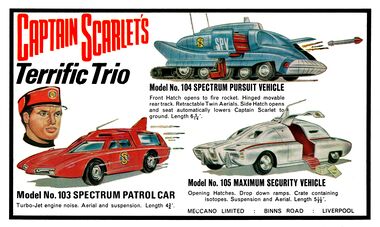 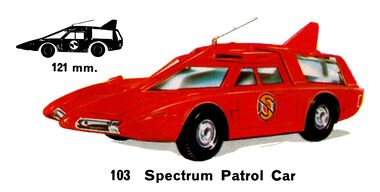 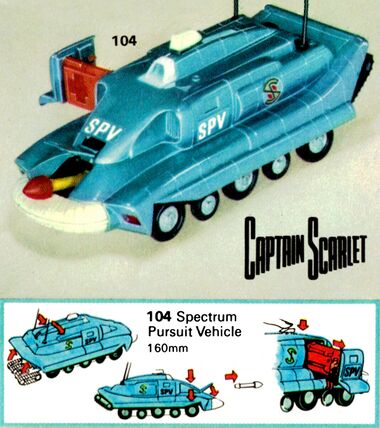 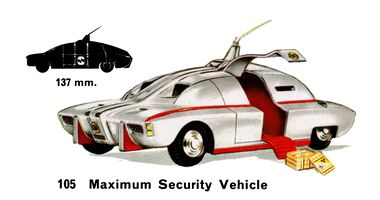 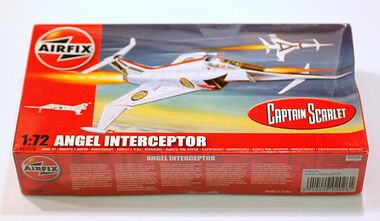 Captain Scarlet and the Mysterons (normally just referred to as Captain Scarlet) was a marionette-based television series produced by Gerry Anderson.

The concept of Captain Scarlet was that an Earth exploration of Mars had accidentally made enemies of the local Mysterons, strange disembodied entities whose presence was represented by a ring of light that passed eerily over objects ... a brilliant idea that probably allowed an "alien" to be implemented with a slide projector and a slide of a white outline circle. As with UFO, the plots revolved around an organisation tasked with defending the Earth, this time called SPECTRUM. Spectrum was headed by a Captain White, Captain Scarlet was part of the organisation, and a certain amount of his time was spent trying to combat the actions of villain and saboteur Captain Black.

The Mysterons had the ability to possess obects by recreating them after they had been destroyed. Captain Scarlet is initally killed by the Mysterons and recreated as a Mysteron agent, but (unlike Captain Black) his recreated double is somehow independent of the Mysteron's control, and continues to work for SPECTRUM, with the added bonus of now being indestructable.

Episodes typically reached a climax with Captain Scarlet heroically losing his life in an attempt to save the situation ... and then miraculously turning out not to be dead after all.

Given that Captain Scarlet's main superpower was the ability to repeately die with no obvious long-term side-effects, not everyone was convinced that it was a good idea to combine puppetry (which suggested that this was supposed to be a show aimed at small children) with plotlines that essentially involved the heroic death of the main character every week. Given that small children have a propensity for acting out the behaviour of their heroes, worries about copycat behaviour may have made television companies more reluctant to show repeats of Captain Scarlet, rather than other "safer" shows like Thunderbirds.

There was also the problem that the viewer essentially knew in advance what the climax of every episode was likely to be, and that the main character was probaby never in any real danger.