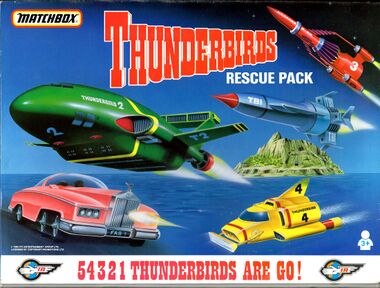 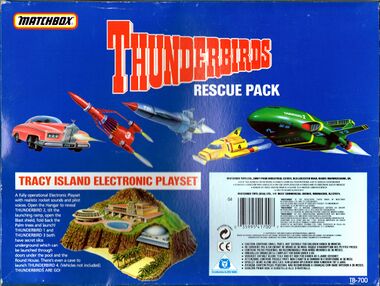 With the resurgence of interest in Thunderbirds in the 1990s (due to more repeats on tv), Matchbox produced a Thunderbirds range in 1992.

The original franchise for Thunderbirds-related diecast toys in the 1960s had gone to Meccano Ltd and the Dinky Toys brand, but by the 1990s, Meccano Ltd and Lines Brothers (who'd taken over Meccano Ltd. the range in the mid-60s) no longer existed, and the "Dinky" brand was no longer a market leader.

Matchbox approach to the designs was to produce a larger range of physically smaller models, and ... critically ... to also produce a wildly succeessful model of Tracey Island with electronic sound effects, that took the models.

Tracey Island was supplied without the diecast vehicles, which were available as a separate pack to go with it. Alternatively, the vehicles were available individually in transparent bubble packs.