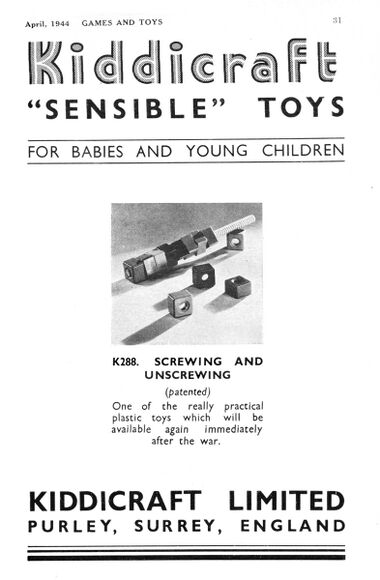 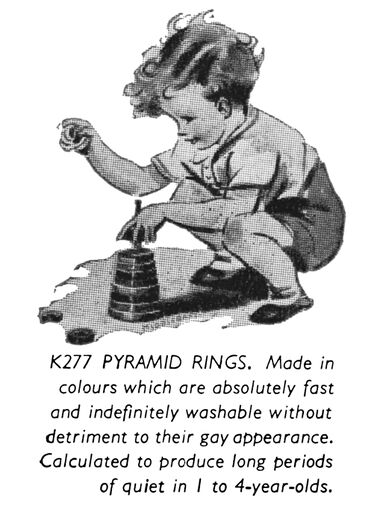 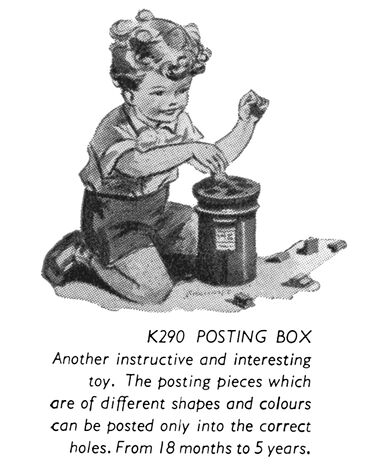 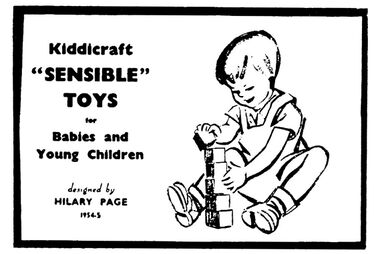 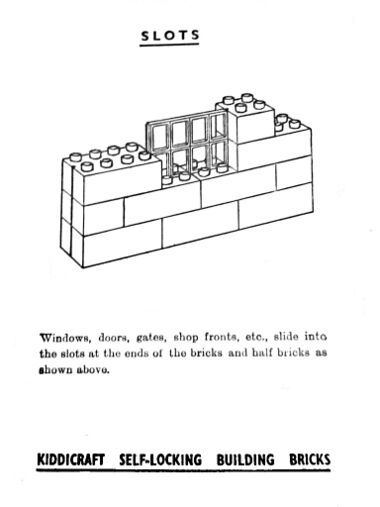 Kiddicraft was started by Hilary Page in 1932. The brandname was later used by Fisher-Price.

Hilary Page's family owned a lumber yard, and his initial forays into toymaking revolved around wood, and around importing "educational" wooden toys from abroad that could stimulate the development of the child's brain, such as nesting hollow wooden cubes and shapes that could be stacked together and pulled apart.

Although some of this territory had already been explored by Friedrich Fröbel, Page set himself a mission to redesign children's toys scientifically to create the ultimate range of children's educational toys, not just by imposing abstract concepts of how children ought to understand shape and function, but by spending time in kindergartens watching how children actually played in real life. Page's studies left him slightly horrified – children gnawed on the corners of painted wooden toys, ingested paint and primers and wood-treatment chemicals, and left the toys with rough, chewed, wet surfaces that bred bacteria. As a result of his research, he decided that it would be better if wooden toys designed for pre-schoolers were replaced by the new plastics. The new materials allowed Page's "Sensible Toys" to be brightly coloured, non-toxic, hygienic and and unpainted, and they could be sterilised in boiling water without damage.

1955: "Kiddicraft Sensible Toys, Designed by Hilary Page ... part of the process of growing up"

strictly according to the book

It's open to discussion whether the Fothergills arent perhaps a mite over-conscientious in the upbringing of their children. Perhaps it's going too far to have placed such a wide variety of toys on the "banned" list – to insist that each and every plaything must fulfill some positive purpose. But the Fothergills are a business reality to be reckoned with – and for the Fothergills the milestones in the children's progress will forever be linked with the purchase of an unending succession of KIDDICRAFT 'Sensible' TOYS which never fail to inspire an almost fanatical devotion.
You earn "full marks" with the Fothergills if you're a retailer who can always show them a full range of KIDDICRAFT 'Sensible' TOYS – and to judge by KIDDICRAFT sales, there must be an awful lot of Fothergills about.

Page started with "Kiddie" nursery toys, and when it came time to design a replacement for the traditional wooden building block his preferred approach of using injection moulding meant that the resulting blocks were lightweight but had an open base, and this meant that in order to be easily and reliably stacked, the blocks needed to have protrusions on their upper surfaces.

The early Interlocking Building Cubes (Kiddicraft) were still basically cube-shaped, with rounded vertical edges and came in a set of different colours moulded from a Bakelite-like material. However, the blocks didn't mate together especially well due to inflexibility of the material and inaccuracies of the moulding process, and Page needed to use the new precision injection moulding processes and experiment with better and more suitable plastics.

As Page continued to develop the concept (patenting his developments along the way), he decided that it would be useful to have a smaller version of these stacking, interlocking blocks, but shaped roughly like UK housebricks so that older children could create model buildings using techniques used in conventional British brick-built houses.

Page developed what we'd now recognise as the outline of the modern Lego brick, but with additional slots cut in two end walls to allow the brick walls a greater degree of flexibility when clipped together. Since the system was still partly experimental, these slots let the brick bases act more like spring-clips, and gave Page an extra level of protection from the effects of tiny changes due to manufacturing tolerances and variations in material that had affected the Building Cubes range.

Page turned these functional slots into "features" – the sets came with doors, windows and shopfront displays printed on card which could be slid into the end-slots, and children's creativity coudl be further encouraged by letting them make their own card add-ons.

The new Kiddicraft "Self-Locking Building Bricks" (1947) had an awkward name, and were targeted at an older age group to Kiddicraft's existing "toddler" range, and the new toys didn't immediately do well.

Page's next move was to try to restore the company's fortunes by bringing out a massive range of hundreds of dollhouse accessories as collectable miniatures, but before the range could be completed, worries about the company's future got too much for Page, and in 1957 he committed suicide.

Unknown to Page, the Lego company in Denmark had been shown samples of his designs by an enthusiastic sales rep for a London-based company who wanted to sell Lego an injection moulding machine, and had already copied his patented designs without telling him, had cloned (some would say "stolen") his product, and had been selling it since 1949 (with Page's patented "Self-Locking" brick becoming Lego's "Automatic Binding" brick). The dimensions and proportions of the Danish company's bricks were indistinguishable from Page's, the only real differences being that was that the Danish company used perfectly sharp edges where Page had "softened" his with a slight rounding, and that Page had also rounded the tops of his pegs to aid location, while the "copy" flattened the tops and used them to display a company logo. And, of course, had removed Page's patent notice on the underside.

Lego started selling their products in Britain in 1959.

Lego's version of the design continued to be refined, notably by the removal of the side-slots and the addition of extra extruded detail in the centre of the brick to improve grippage. Lego went on to become known as the world's most successful toy, but Page, the guy who put in the years of research and development to create the concept, research the materials and create the perfect shape and size, never got to see its success.

The following 74 files are in this category, out of 74 total.