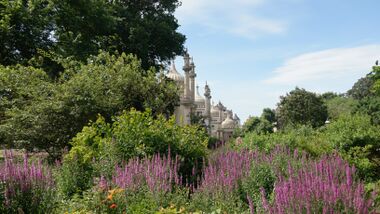 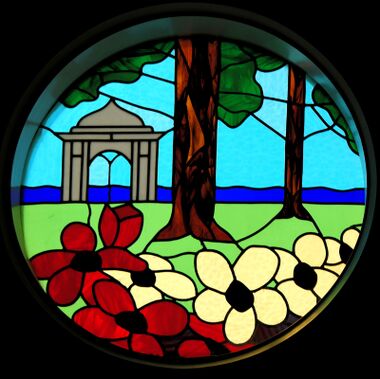 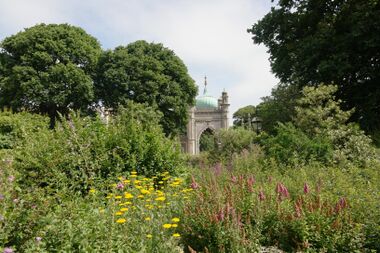 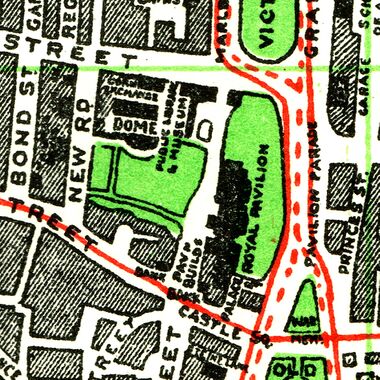 1939: Map showing the Pavilion Estate, with a hard path running past the Pavilion, directly linking Pavilion Buildings with the North Gate. This was replaced with the current more ornamental, circuitous route when the gardens were replanted and restored to the original masterplan. [image info]

The Pavilion Gardens are a lovely exotically-planted public space in the centre of Brighton.

The gardens were created by George IV by the ongoing acquisition of all the land between his Royal Pavilion and the Pavilion Stables buildings, which now house the Brighton Dome venue and Brighton Museum and Art Gallery. One of last stages of his acquisition was his getting the agreement of the locals to allow him to remove the road that crossed the space to make the gardens a single block, with the missing road being replaced by a newly built New Road running along one side of the site

The gardens contain the entrances to the Royal Pavilion and the Brighton Museum and Art Gallery.

The Gardens can be accessed from the Northeast by the North Gate, from the South by the short Pavilion Buildings road that leads off North Road to the India Gate, and from the West where New Road runs along its West side.

Visitors to Brighton coming from Brighton Station or down Grand Parade often enter the gardens from the North Gate and exit from the Indian Gate on their way to the seaside.

There's a cafe on the West side of the Gardens, and the area is a nice place to stop for a break, although its a little lacking in seating, so you'll have to sit on the grass (or use the benches on New Road). Then again, the lack of benches means that people don't spend all day there, stopping the Gardens from getting too busy.

The east front of the Pavilion opens to a lawn of about 300 feet in extent. On the north side are shrubberies; on the west are pleasure grounds and a grove of elms; and on the south the Chapel Royal and other buildings. The whole of his Majesty's demesne here comprises between seven and eight acres; the principal part of which was obtained by purchase, and the rest by grants from the inhabitants.

One improvement is still wanting; and that is, to sweep away the unfinished buildings near the south-east angle of the Palace, fronting the Steyne.

IX. Provided nevertheless, and it is hereby expressly enacted, That the aforesaid Lawn and Pleasure Grounds forming Part of the said purchased property, after the same shall have been converted into or adapted for the Purposes of and whilst the same shall remain Pleasure Grounds pursuant to this Act, and every part thereof, shall always remain and be kept open and accessible to the Public, for Purposes of Exercise, Recreation, and Amusement, on every Day in each Year between the Twenty-fifth Day of March and the Twenty-ninth Day of September, both inclusive, from Six of the Clock in the Morning until Sunset, and from the Twenty-ninth Day of September to the Twenty-fifth Day of March form Eight of the Clock in the Morning until Sunset, but subject nevertheless to such Bye Laws, Rules, Orders, and Regulations as may from Time to Time be made ...

, about six acres in extent, are well provided with seats, and form a pleasant resort. The flower-beds are well laid out, and the grounds contain some fine old elms. During the summer Promenade Concerts are a popular feature. Near the south entrance is a statue of Sir John Cordy Burrows, three times Mayor of Brighton.

The garden surrounding the Royal Pavilion has been restored to its original Regency splendour closely following John Nash's plans of the 1820s. As the architect of the Royal Pavilion, he conceived the building and grounds as a unit, and effect which has inevitably been compromised by the passage of time. The restoration has returned the garden as far as possible to its appearance in the 1820s with serpentine paths weaving through the lawns and shrub-beds in imitation of forest scenery. Naturalness is further emphasised by unedged lawns sweeping under the shrubs; unlike modern lawns the grass is kept longer in keeping with Regency gardening customs.

The first phase of the remodelling of the Royal Pavilion garden commenced in the mid 1980s, initiated and sponsored by the Historic Gardens Trust (Sussex), with invaluable support from John McCarthy. The second phase of the restoration, completed in 1992, was funded by Brighton Borough Council, the Hove and Brighton Urban Conservation Project Board which channels funds provided by Hove Borough Council, Brighton Borough Council, East Sussex County Council and English Heritage to environmental work in the two Boroughs, with emphasis on the spaces between buildings. Research and design work was undertaken by East Sussex County Council Planning Department with assistance and advice from the Garden History Society.