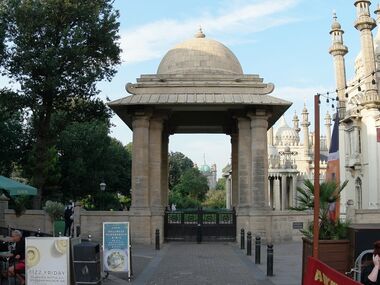 2018: India Gate, seen from outside the Gardens. The North Gate can be seen in the centre distance, framed by the gate, and part of the the Royal Pavilion is just visible to the right [image info] 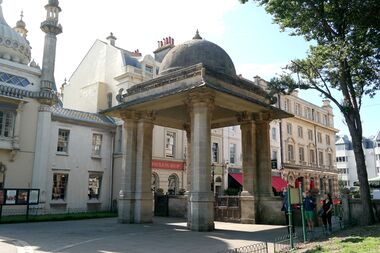 2014: View of India Gate from inside the Pavilion Gardens [image info]

Inscription on the wall alongside the Gate [image info]

The Pavilion Gardens' India Gate (or Indian Gate) is a Gujarati-styled stone gateway between the Gardens and Pavilion Buildings. It was donated to the Town as a gesture of thanks for the care given to Indian servicemen during World War One, during which the Pavilion was famously used as a hospital.

The India Gate was ceremonially opened in October 1921 by Bhupinder Singh, the Maharaja of Patiala (who was one of the main donors).

This is distinct from the Chattri, a dedicated memorial to commemorate the Indian soldiers who died in the Great War, which overlooks Patcham, and was unveiled in February of the same year.

Brighton had a number of sites pressed into service for medical care of "Empire" soldiers, the idea being that dedicated sites would make it easier to allow the dietary and cultural requirements of Hindu, Muslim and Sikh service personnel to be properly attended to (and an apparent suggestion that the Pavilion's Eastern-inspired architecture might make some of the convalescents feel more at home during their stay).

The India Gate is supposed to have been designed by Thomas Tyrwhitt RIBA (1874-1956), Tyrwhitt did some architectural work in South Africa and Hong Kong, and at the time had a London-based practice, and had just done some small works for the Ministry of Agriculture.

The previous South Gate consisted of a pair of smaller squat-onion-domed four-pillared pedestrian entranceways, flanking a comparatively low pair of iron gates that could be swung open to allow horses and carriages to pass.

The 1851 South Gate was built after the Commissioners acquired the estate in 1850, and replaced a yet earlier South Lodge that existed when the estate was private, and which was demolished after the acquisition.