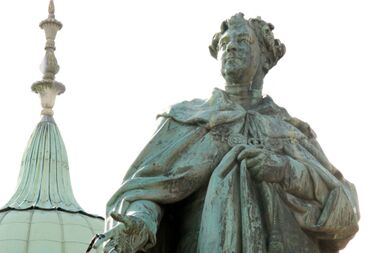 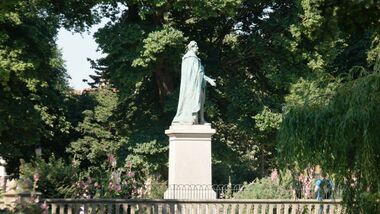 Side view of the statue, looking North from Pavilion Gardens, with Victoria Gardens in the background (on the far side of a road) [image info]

The Prince of Wales (later to be King George IV) arrived in Brighton in 1783 and used it as a base where he could enjoy himself and the company of his unofficial partner Maria Fitzherbert, away from the attentions of the Court in London.

As heir to the throne, George was able to rack up mind-boggling levels of debt, and having just made himself unpopular in London by spending a fortune that he didn't have in building of 'Carlton House, he found himself wanting to avoid his London neighbours and the court. The idea of putting some distance between himself and London was also attractive to him, since he was determined to marry Maria despite the fact that, as a Roman Catholic (with sworn allegiance to a foreign Head of State), she wasn't legally allowed to be Queen ... and hence wasn't allowed to marry the heir to the Throne.

The Prince Regent and Brighton

With the exception of this incident Brighton may be said to have been in the happy condition of having no history until the memorable September 7, 1783, when the Prince of Wales – afterwards the Prince Regent, and subsequently George IV – paid his first visit. Of the character of this august personage it is not necessary to say much. Thackeray's description, though exaggerated, cannot be said to be unjust:-

" His sires and grandsires were at least men . . . but this George – what was he? I look through all his life and recognize but a bow and a grin. I try to take him to pieces, and find silk stockings, padding, stays, a coat with frogs and a fur collar, a star and blue ribbon, a pocket handkerchief prodigiously scented, one of Truefitt's best nutty-brown wigs reeking with oil, a set of teeth and a huge black stock, under-waistcoats, more under-waistcoats, and then—nothing. ... He must have had an individuality: the dancing-master whom he emulated, nay, surpassed – the wig-maker who curled his toupee for him – the tailor who cut his coats had that, but about George one can get at nothing actual. "

" A stranger contradiction of qualities was never gathered under one hat. He is a man who is always in a hurry, and yet has never anything to do. He fusses about things with which he has no concern, and he neglects every obvious duty. He is generous to those who have no claim upon him, but he has, ruined his tradesmen by refusing to pay his just debts. He is affectionate to casual acquaintances, but he dislikes his father, loathes his mother and is not on speaking terms with his wife. He claims to be the first gentleman of England, but the gentlemen of England have responded by black-balling his friends at their clubs and by warning them off from Newmarket under suspicion of having tampered with the horses. He spends his days in uttering noble sentiments and contradicting them by ignoble actions. ... And yet with all this he can be courteous, dignified, and kindly upon occasion, and I have seen an impulsive goodheartedness in the man which has made me overlook faults which come mainly from his being placed in a position which no one upon this earth was less fitted to fill. "

The purpose of the Prince in coming to Brighton was to visit his uncle, the Duke of Cumberland. He seems thoroughly to have enjoyed his eleven days' stay, bathing, boating, hunting, and participating in every amusement the place afforded with all the zest of a newly-emancipated schoolboy. No one was surprised when he came a second time on July 23, 1784, or if any surprise was felt it was rather at the hour of his arrival than at the fact itself. His Royal Highness reached Brighton, the chronicler informs us, between three and four o'clock in the morning! His cook, the celebrated Weltjie, had previously engaged for him from Mr. Thomas Kemp a house on the Steine, which the poet Rogers, who had dined there as a boy, contemptuously characterized as "a respectable farmhouse". This home the Prince bought and it subsequently formed the nucleus of the nucleus of the Royal Pavilion, which the Prince occupied at such times as his engagements permitted, and the repairers were not in possession, until March 1827, the last recorded date of a visit from him. The house was soon altered and extended and the new building was first capped with a little hemispherical dome, of which a view can be seen in the present Pavilion gallery.