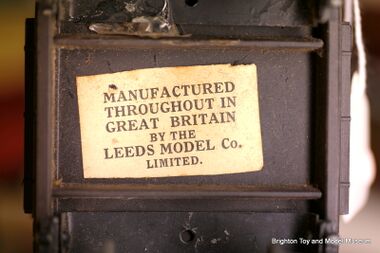 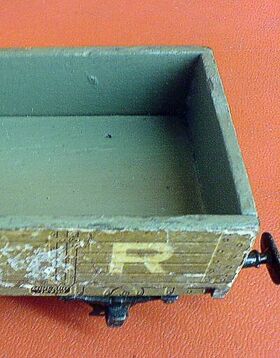 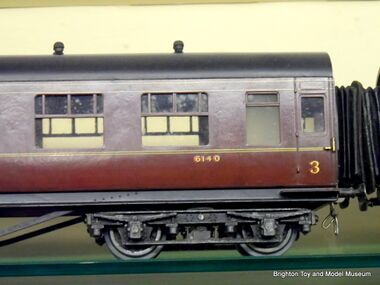 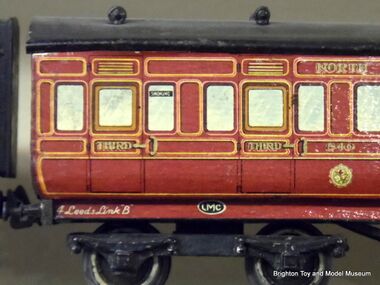 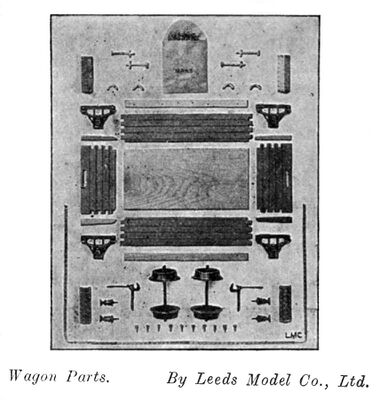 1928: Leeds kit of parts for a railway wagon [image info] 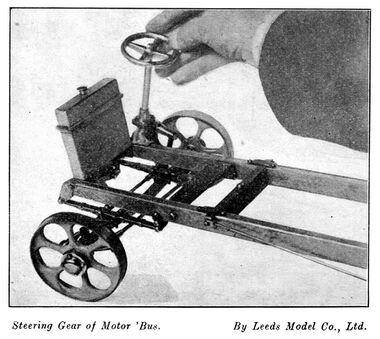 The Leeds Model Company (also known as Leeds, or LMC) was started in 1912 by Rex Stedman.

It produced good quality gauge 0 model railway stock, targeted at two markets: Mass-produced models that could be produced cheaply, and more expensive models that were made to order.

For the cheaper range, Leeds produced rolling stock with wooden bodies, and lithographed paper decals. As well as being less expensive to produce, the paper decals meant that Leeds could offer customers the chance to give their existing wooden rolling stock a new identity just by buying and applying a fresh set of decals, and also let Leeds aim advertising at the "home constructor" market.

The original concept (which Stedman was granted a patent for in June 1921) was for printed and embossed panels of cardboard or tinplate to apply to blank, purely-"structural" carriage sides, tunnel mouths and the like, to provide an overlay with three-dimensional detailing. However, in practice, the company seems to have decided that it was simpler to just lithograph thin, high-quality, flat paper and miss out the embossing stage – while embossing might work with brickwork, it was possibly not so well suited for the thin, abrupt, "sharp-edge" detailing of railway carriage door-edges, unless one used thick, more easily compressible card ... in which case the sharp edge would be liable to cut the surface and disrupt the printwork.

Another difficulty with the original idea was that embossing (as shown in cross-section on the patent drawings) would mean that the back of the panel was no longer quite flat, making adhesion more difficult. Sticking flat paper onto a flat surface meant that there was less to go wrong with the production process.

Leeds also produced a range of rolling-stock using the then-new "Bakelite" plastic material. as an unexpected side-effect of the combination of weight, shape and sound-transmission properties of the new material was that the moulded Bakelite models turned out to have an uncanny ability to sound like real railway carriages when they crossed a model railway layout's point.

As a result, these Leeds models have the slightly odd distinction of getting rave reviews from enthusiasts for the noise they make.

Leeds also made a range of nice locomotives. However, the metal alloy used in some of the castings turned out to be unstable, and over a period of years, some of the components of some of these models (typically the cast metal wheels, and the cast metal side-pieces for the electric motors) were had a tendency to deteriorate, necessitating their replacement with new parts.

A product of the Leeds Model Co., Ltd., is illustrated and shows all the necessary parts for a L.N.E.R. 10-Ton Goods Brake Van of the regulation pattern.

These sets are complete with all the necessary wooden parts, including the sides, floors, ends, solebars, buffer beams, and guard's lookout. The metal parts include necessary metal axles, guards with footplates complete, wheels mounted on axles, tinplate roof ready curved to the correct shape, and in addition the couplings, screws and nails, and a set of lithographed sides and ends. The wooden parts have simply to be glued and pinned together, the dovetailed corners ensuring a very rigid joint. The solebars and buffer beams are assembled and fitted, and the buffers and the couplings fixed in place, the axle guards have to be screwed into their places, with the axles in position. The roof s then fixed, and any rough edges smoothed with fine sandpaper, after which the lithographed facings are pasted on, and when dry the buffer beams and other parts are painted in their proper colours.

...
The method of construction of these models is well worthy of consideration. The bodywork is of seasoned wood, all corners being lock jointed and floors grooved so that the resulting article is as strong as can possibly be made. On covered vehicles, the roofs are metal, fitting securely into grooves in the top of the body work.

The Lithography has been exceedingly well carried out, and the details found on the actual vehicles have been very faithfully reproduced. These lithographed sides and ends are securely fastened on the wooden bodies, and where there are corner plates, these are actually carried round on to the ends, giving additional strength of fixing.

The underframes are equipped in the four wheeled models, with our unbreakable axleguards, having the springs, hangers and axle-boxes die cast in a special white metal, giving a frictionless bearing for the journals.

Eight wheeled vehicles have our famous tinplate bogies, the detail of which is reproduced in a similar way to the axleguards.

All models are fitted with our new " NEWALLOY " wheels which have created so much interest in the model world this year. These wheels are equal in every way to cast iron, and they run dead true on their axles.

There is yet another great advance. Our whole set of litho models are now fitted with NON-LOCKING BUFFERS and SCALE 3 LINK COUPLINGS, the latter having springs fitted, this easing the strain on locomotives when starting off with a heavy train.

What better rolling stock could anyone want? – and just look at the prices! We are offering REAL SCALE MODELS in Coaching Stock, and 24 DIFFERENT MODELS in Goods Stock, and we can supply them ready to run or in Finished Parts for you to erect yourselves.

Leeds produced two locomotives for Bassett-Lowke in 1922 (the one we've seen has a small LMC transfer), at a time when (World War One having only recently ended, and Carette being a casualty of the War), buying further stock from Germany to sell to the British market was "problematic". As well as the "Leeds for Bassett-Lowke" models, some Leeds locos also appeared in the Milbro and Bonds catalogues.

Since Leeds weren't one of the very biggest manufacturers, later collectors tended to spurn their pieces, and a couple of decades ago, anyone trying to sell locomotives or rolling stock made by the company might have had trouble shifting them. Many people with stock of Leeds pieces in their stockrooms or attics may have been advised at the time that the pieces weren't worth anything, and may have simply thrown them away.

However, nowadays there's more appreciation for Leeds items, especially some of the more beautiful "made to order" items from the more expensive end of the range, and the fact that so much of the company's production now seems to have been "lost" now gives some pieces an unexpected rarity value.

Leeds stayed a family-based business, and had later incarnations as R.F. Stedman (when Stedman started a new company), and as Ellemsee Accessories ("LMC").

Currently the Trust keeps a collection of 0 Gauge locomotives, rolling stock and other model railway items representative of the standard catalogue range of the Leeds Model Co./R.F. Stedman & Co. The archive includes catalogues (from 1915-1967), photographs, drawings, documentation, advertisements, etc. from the early 1900s onwards. David Peacock and his son Marcus are the joint proprietors, trustees and archivists.

The Trust holds a large, but not comprehensive, stock of both original used and unused LMC parts for locomotives, coaches, wagons, signals and track. This stock is augmented by newly manufactured part using either original LMC patterns or re-engineered tools and dies following the original as closely as possible, but using brass, pewter or white metal instead of 'Newalloy' and other pressure die cast zinc alloys. Colour photocopies of most coach and wagon lithographs and copies of LMC drawings are available from the Trust archive collection. The Trust also works on and co-ordinates the repair and restoration of models and acts as a clearing house between vendors of LMC products and prospective buyers.