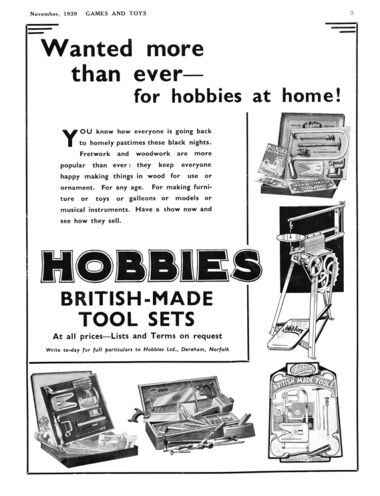 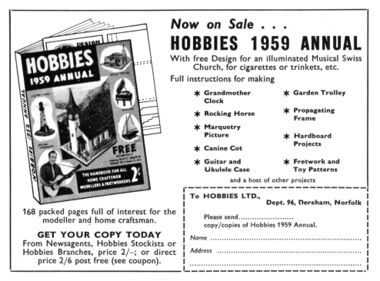 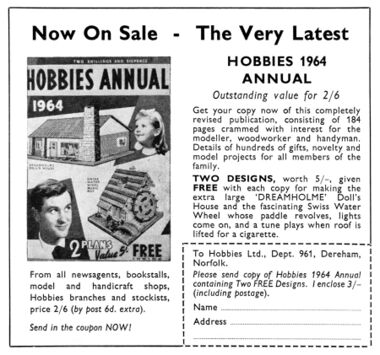 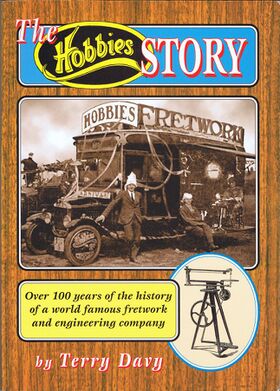 The driving force behind Hobbies was John Henry Skinner, who also dabbled in photography and garden supplies, but found a niche in fretworking supplies - his uncle had a timber yard, and selling small pieces of wood to hobbyists, mail-order, at retail prices, was probably a comparatively lucrative enterprise. Hobbies dominated the fretwork supplies market, and Hobbies Weekly provided a constant flow of new designs to make.

The original Hobbies company went into liquidation in 1968, but was relaunched by Ivan Stroulger, who had been the Supply Manager at Dereham before being made redundant when the company closed. Although Stroulger died in (2009?), his relaunched Hobbies (Dereham) Ltd. is still going.

While the Hobbies Weekly publication covered a range of hobbies, it specialised in the company's core business of fretworking-related articles. This worked well for the company: The magazine (and regular advertising in later publications such as Meccano Magazine) encouraged readers to feel that they would be empowered by investing in a fretworking setup, after having got it, many users would find themselves wondering what to actually use it for. Hobbies Weekly, and the Hobbies catalogue, and the Hobbies Annual could help!

With Hobbies Weekly publishing a full design every week, the pressure to keep coming up with new ideas meant that some of them ... such as the Classic Cars Pincushion, or the Home Shrine were not exactly essential money-saving ideas for the home. However, for a growing customer-base hungry for new fretworking ideas, the hobbies publications were, at the very least, regular recreational reading.