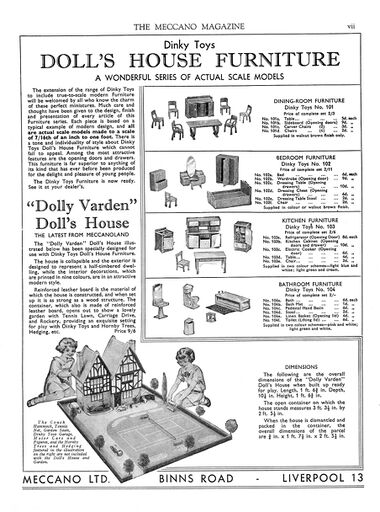 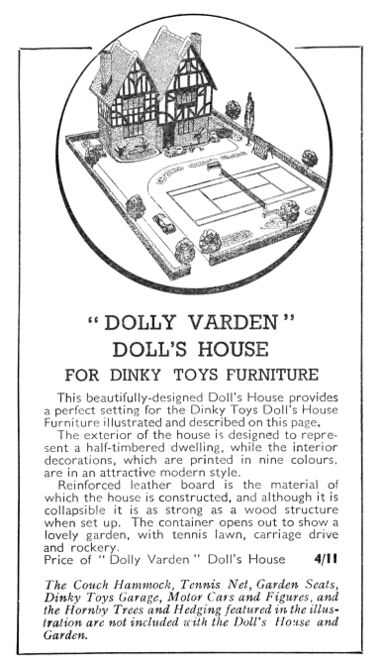 An assembled Dolly Varden dollhouse made by Meccano Ltd. between 1936 and 1940. The dollhouse is displayed with two a full sets of Dinky Toys Dollhouse Furniture (one set boxed, one set inside the dollhouse), but (due to display space considerations) without its long driveway and printed front garden. 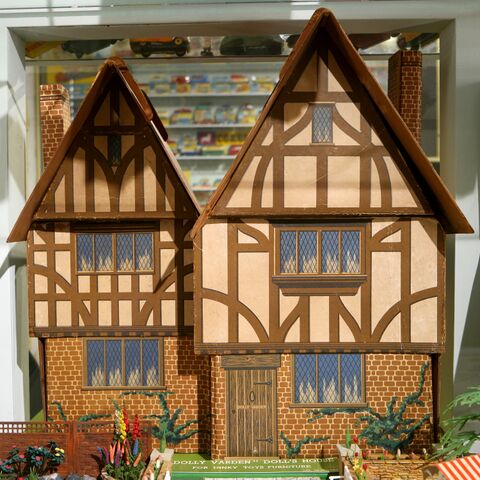 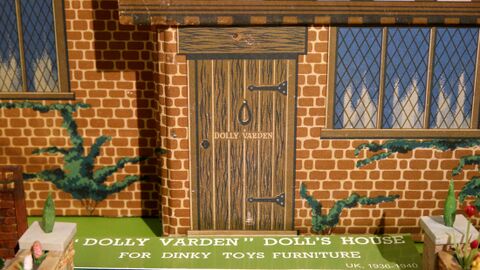 The "Dolly Varden" Doll's House for Dinky Toys Furniture represented Meccano Ltd.'s short-lived attempt to branch out from their existing "boys' toys" ranges and produce something that would appeal to girls, and still use the "Meccano" theme of being an expandable, collectable system toy that linked into existing product ranges. 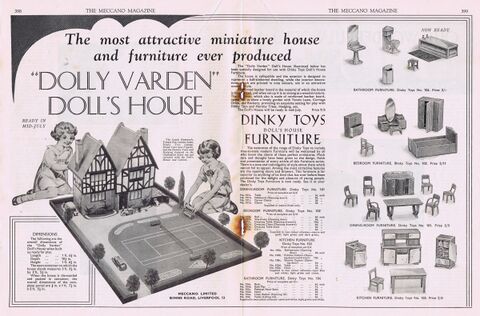 This was a little difficult for the company since its design and production was geared up almost exclusively for the production of metal toys. The solution that the company hit on was to produce their own range of dollhouse furniture in metal (sets No.101-104), using the diecasting and hinging techniques used for Dinky Toys. Since most dollhouse furniture was made of wood and fabric (and then, plastic), the idea of diecast metal furniture would perhaps not have been an obvious one for most UK manufacturers. 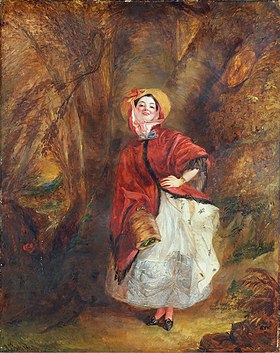 The "Dolly Varden" name comes from a character in Charles Dickens' ~1840 novel, Barnaby Rudge, presumably on the basis that the name had some sort of recognition factor, and started with "DOLL...". And since Dickens (1812-1870) was dead by this time, he couldn't complain about his character's name being borrowed.

The "Dolly" character from the book seems to have made quite an impression on the public, and the name appears in a range of other contexts apart from the Meccano Ltd. dollhouse, including a popular name for a getup that includes a dress and a large hat ("She wore a Dolly Varden"), and ... a spotted variety of North American trout (Dickens' works were popular in the US as his books were widely pirated there, due to US publishers not having to pay royalties to foreign authors unless a given book had a US-produced edition).

This left the problem of how to build a dollhouse to put the items in.

Although Meccano Ltd.'s speciality was making things out of metal, making a metal dollhouse may have seemed like taking things a step too far (although Marx and Mettoy did later make tinplate dollhouses). The other material that Meccano Ltd. had some experience with (because they used it for packaging), was stout cardboard, and the Dolly Varden dollhouse was made from what the company referred to as "leatherboard", which slotted together to produce the house and a long driveway, and could be folded back away again for storage.

Rather untraditionally, the front of the house was fixed, and to see the rooms one had to go around to the back, where each of the four rooms consisted of its own open-fronted container, the result of the four stacked containers looking suspiciously like a stack of cardboard box-lids.

Perhaps to compensate for the rooms and the house being quite small, the house came with a extravagantly large printed front garden and driveway, with a printed tennis-court, suitable for parking a significant number of Dinky Toys. However if a child was playing with the driveway they couldn't see the room interiors, and vice versa. Perhaps the idea was that the dollhouse could be played with simultaneously by two children, one playing with the rooms and another with cars on the driveway, but the amount of space needed would be quite large, and while a normal dollhouse could be left out in the corner of the room, the Dolly Varden dollhouse would tend to dominate a room's centre, and risk being trodden on.

The need to constantly unpack the dollhouse and pack it away safely again, combined with its cardboard construction and slot-together tabs, means that not many good-quality examples have survived. It might also be that the dollhouse was not particularly successful, due to its unusual scale (which would put off most dollhouse furniture collectors), and that fact that most readers of Meccano Magazine (where it was advertised) might not have been particularly interested in collecting dollhouse furniture.

It has been argued that the Dolly Varden is the rarest item ever produced by Meccano Ltd., and certainly the rarest Dinky-range related product.

The "Varden" in the museum was finally acquired in 2020/2021, after many long years of searching. The front garden isn't on display.

An imperfection of the piece was that one of the chimneys had been lost and replaced at some point. We've responded to this by creating a new, better replacement chimney, using the existing original as a master copy.

The space in front of the "Varden" has been used to create our 2021 Britains Floral Garden display. Although not contemporary, the 1960s "Floral Garden" range replaced an earlier lead-based garden range in the same scale (Britains Garden) that was contemporary with the "Varden".

The following are the overall dimensions of the “Dolly Varden” Doll's House when built up ready for play.

The most attractive miniature house and furniture ever produced

The "Dolly Varden" Doll's House illustrated below has been specially designed for use with Dinky Toys Doll's House Furniture.

The house is collapsible and the exterior is designed to represent a half-timbered dwelling, while the interior decorations, which are printed in nine colours, are in an attractive modern style.

Reinforced leather board is the material of which the house is constructed, and when set up it is as strong as a wood structure. The container, which is also made of reinforced leather board, opens out to show a lovely garden with Tennis Lawn, Carriage Drive, and Rockery, providing an exquisite setting for play with Dinky Toys and Hornby Trees, Hedging, etc.

The Doll's House will be ready in mid-July.

The extension of the range of Dinky Toys to include true-to-scale modern Furniture will be welcomed by all who know the charm of these perfect miniatures. Much care and thought have been given to the design, finish and presentation of every article of this Furniture series. Each piece is based on a typical example of modern design, and all are actual scale models made to a scale of 7/16 of an inch to one foot. There is a tone and individuality of style about Dinky Toys Dolls House Furniture which cannot fail to appeal. Among the most attractive features are the opening doors and drawers. This furniture is far superior to anything of its kind that has ever before been produced for the delight and pleasure of young people.

The Dinky Toys Furniture is now ready. See it at your dealer's.