From The Brighton Toy and Model Index
(Redirected from Marx)
Jump to:navigation, search 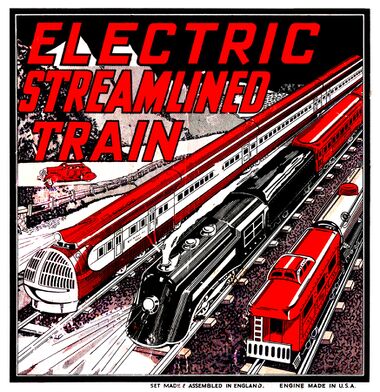 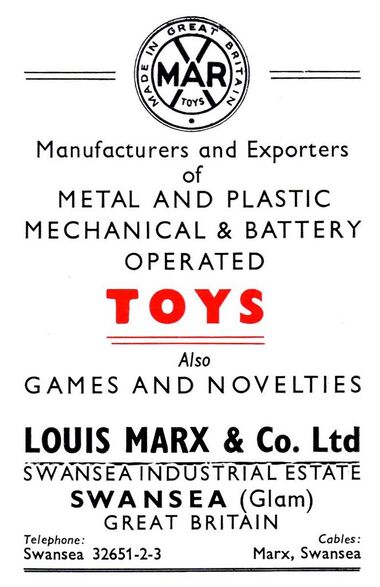 Louis Marx and Company was founded in the US in 1919, by Louis Marx, who was soon joined in the business by his brother David.

Louis Marx (1896-1982) had started work at the age of around fifteen or sixteen for the toymaker Ferdinand Strauss, and rose quickly through the company before leaving after a falling-out. With a keen eye for what made toys sell, Louis briefly worked as a consultant advising on ways to make toys cheaper and more popular without sacrificing quality, and then proved his marketing credentials by buying out a couple of old obsolete tin toys from the Strauss range and making a few minor changes to turn them into roaring successes.

Louis Marx had a keen eye for a trend (the company got in early on the yo-yo craze), and his knowledge of how to build quality toys more cheaply than the competition, and his knack of only making toys that he knew customers would want to buy, resulted in a company that just kept making money. Louis and his brother rapidly became millionaires, and Marx was acclaimed as "The Toy King of America", with Marx eventually being credited as being the largest toy company in the world, partly thanks to sales through third-part mailorder businesses such as Sears.

Initially known for their quality tinplate toys, Marx successfully moved into plastics after WW2. Louis had always been more interested in how toys appealed to customers and their efficient production than the specifics of what they were made from, and his enthusiasm for challenging existing assumptions about toy design and production probably made him especially psychologically suited to the challenge of migrating to the new materials and techniques. Marx also entered the diecast toys market with low-friction toy cars that competed with Mattell Hot Wheels and Matchbox, and went on to produce products to reflect 1960s counterculture.

However, Marx's key strengths - his ability to distance himself emotionally from the production process and focus on what appealed to the customer, and to apply his acute visual sense of what was likely to trigger a "buy response" when browsing a mailorder catalogue - weren't going to be so useful when it came to the new generations of electronic toys that were on the horizon, and in 1972 Marx called it a day, sold the company to Quaker Oats, and retired.

The Marx company was already in decline in 1972, and Quaker seemed to be quite perplexed about what to do with the company after it acquired it. Unlike Fisher-Price (which Quaker also owned), Marx hadn't invested heavily in advertising its brandname to the public (preferring to let the toys "sell themselves"), so there wasn't a strong overall brand presence to capitalise on, or even a distinctive identity or theme that made a "Marx" toy or toy range especially distinctive. Where other companies might have had the luxury of being able to coast for a few years based on their reputation while the company adjusted to the loss of its founder, Marx hadn't invested in building up that sort of brand loyalty - people bought new Marx toys because the individual product names and concepts and advertising and catalogue images looked exciting, not because the name Marx was attached somewhere, and when the existing product line became "old", and new equally-exciting products failed to emerge, there wasn't much to buffer the resulting drop in income.

Quaker sold Marx in 1976 to Dunbee-Combex-Marx (who had already bought the UK arm of the operation about nine years earlier). Marx' prospects continued to decline under DCM, which started shutting plants, and eventually filed for bankruptcy with the assets being sold off in the early Eighties. At this point, the company effectively ceased to exist, although versions of some of the toys (and the Marx name) did occasionally reappear in other companies ranges, as a result of the asset sales.

The Marx name is probably now most associated with their earlier tinplate toys and model railways, which remain collectable because of their robustness and obvious period charm. A collector might see a nice lithographed tinplate toy and say, "Oh, that's pretty, who made that? Ah, it's a Marx", whereas people are less likely to have the same reaction to a later Marx yoyo or a bare plastic "Rock 'Em Sock 'Em Robots" game ... and although a lot of people will have fond memories of the "battling robots" game, and other plastic Marx toys with catchy names and exciting box images, they may not have any idea that these were Marx products.