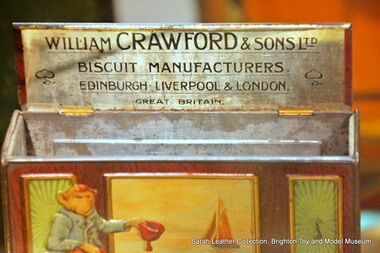 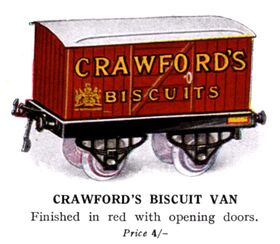 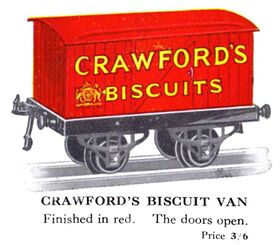 Crawford’s began as a bakery in Scotland in the early 1800s, before opening a factory in liverpool and becoming part of United Biscuits.

Crawford’s Biscuits was opened as a small shop by William Crawford near Leith, Edinburgh in 1813.

The company opened its Fairfield Biscuit Works in Edge Lane, Old Swan, Liverpool in 1897, and along with Frank Hornby's Meccano Ltd. factory in Binns Road, became one of Liverpool's main factory-based employers. Crawfords and Meccano Ltd. were near neighbours in the Old Swan district, and this made Crawfords an obvious candidate when Meccano Ltd. was looking for brandnames to put on the sides of their model railway wagons.

The autobiography of actor Michael Crawford, "Parcel Arrived Safely, Tied with String" says that Crawford (born Michael Patrick Smith, and known as Michael Ingram after his mother remarried) needed to change his surname to get an Equity card as there was already another Michael Ingram registered. While wondering what name to choose, Crawford was inspired by the sight of a lorry on Sheerness High Street marked "CRAWFORD's Biscuits are Best" in large letters.