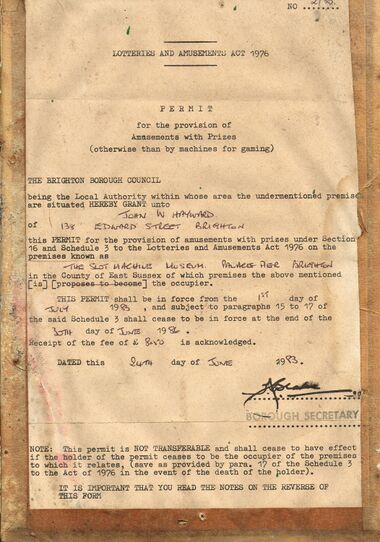 The National Museum of Penny Slot Machines was founded in 1979 by John Hayward and Clive Baker by pooling their collections, and was initially located on the old Birnbeck Pier at Weston-Super-Mare.

Low visitor numbers prompted the museum to moves to the move popular Brighton Pier, where it was housed in the Pierhead's Theatre.

The Penny Slot Museum is the brainchild of John Hayward, a former art student who now devotes himself to running it full-time, and Clive Baker, who currently works in the planning department of a local council.

The museum remained on the Pier until the Theatre building was demolished in the 1980s as part of the Pier's redevelopment programme, and in 1986 the museum moved to the seafront, becoming The Old Penny Palace.

Confusingly, at around the same time, the NMPSM also seems to have moved to Southport, so we're guessing that the John and Clive may have separated their collections, with John staying in Brighton (and Clive moving to Southport?). The Southport "fork" seems to have retained the name "The National Museum of Penny Slot Machines", while the Brighton "fork" appears to have experimented with a range of different names.

The Southport Pier installation eventually came to number 100 machines, but was then split up when a different company took over the concession for the space, with different batches of machines going to South Sea in Portsmouth, Milestones Museum in Basingstoke, and thirty-five machines going to North Pier in Blackpool.

The new Southport concessionaires then installed their own (rather smaller) collection of penny slot machines on the site.