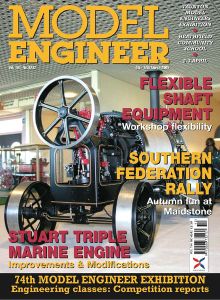 The ploughing engine was an early example of mobile steam-powered agricultural equipment. Ploughing engines worked in pairs, and would set up on opposites sides of a field, and haul a plough back and forth between them using steel cables. The speed and efficiency with which a pair of ploughing engines could plough a field meant that a specialist ploughing engine team could visit farm after farm in season, ploughing fields to contract.

Ploughing engines disappeared when the appearance of smaller and more general-purpose petrol-engined tractors came onto the scene. Owning a tractor was a very attractive proposition for a farm, a farmer was less likely to hire a ploughing engine team if they already owned their own tractor, and once enough farms had tractors, the business model of the travelling ploughing engine team became less viable.

This model was a prize-winner at the 74th Model Engineer Exhibition, where it won the Aveling and Barfield Trophy, and a Gold Medal.

The model was then featured on the front cover of Model Engineer magazine (issue 4242), with a photograph on page 254, and an accompanying commentary that described the model's attention to detail as "endless".