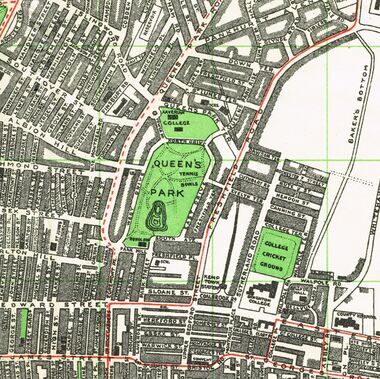 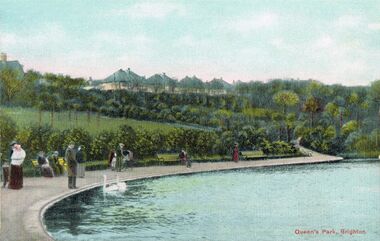 Feeding the swans. This photograph must be pretty early considering the small size of most of the trees! The houses in the background are probably on West Drive (and are probably now invisible from this location due to treeage) [image info] 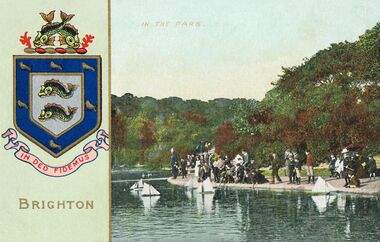 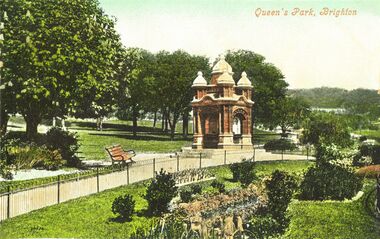 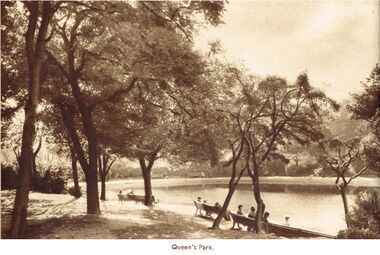 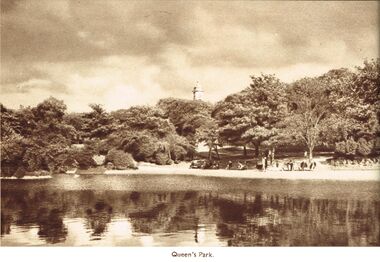 Queens Park opened as a public park in 1892.

For the seventy years prior to this, the park was intended to be the central private or semi-private green space of a series of speculative up-market housing development schemes that never quite came to fruition. The surrounding land ended up being sold off for "normal" housing, with no special rights over the parkspace. The Racecourse Trustees then acquired the park on behalf of the town, as a sister park to Preston Park.

The long Northwest edge of the park is a comparatively flat strip with West Drive running along it. To the side of this strip, the park suddenly plunges down towards the boating lake and an open area to the Northeast. The sloping areas are heavily treed, with the zig-zagging paths creating what feels like a dense complex of different park areas on the same site.

Queens Park has a reasonable number of follies (but not as many as Preston Park) - the absurdly over-the-top ceremonial red stone drinking fountain near the centre is the size of a mall building and looks like a compacted version of the red clocktower in Preston Park, and Queens Park has its own stone clocktower to the East. The famous Pepper Pot folly isn't actually in Queens Park, but is on a road junction just to the North.

The stone entrance to West Drive ("Egremont Gate") is particularly grand, and inscribed with details of the park's donation. A smaller and rather less grand stone version (with a similar inscription) is a little to the East, near the lake.

The parcel of land occupied by Queens Park started out as a dry treeless valley and originally included the space occupied by the present park, along with additional blocks of land (now housing) on the West, North, and Eastern sides – the original boundary can be seen modern maps by tracing out the sequence, clockwise from the main gate, of: Queens Park Road, Queens Park Terrace, Freshfield Road, Freshfield Place, and Park Hill. Of these, only Park Hill is still adjacent to the park.

The land went through a series of hands before it ended up as Brighton's second main public park after Preston Park, with a sequence of speculators agreeing that the land would make a fine private park at the centre of an upmarket housing development, with the surrounding land suitable for a ring of expensive villas overlooking it. However, only one such villa ended up actually being built.

John Armstrong originally leased the site in the early 1820s to create a semi-private "access-by-subscription" "Brighton Park". A plan from a little later than this (estimated ~1926) shows a "fat teardrop" shaped loop of road with the rounded point by the Park Road entrance, and with Upper Drive West, from the Egremeont Gate, feeding on to it. The Middle Drive then ran roughly North-South through the middle. Land outside this ring road was then divided up into large segment plots, with the northern section with the "southern aspect" view of the path reserved for an existing or planned building (probably partly as a "show house" for the rest of the proposed estate).

The next owner was Thomas Attree, who bought it in around 1830, walled it off, planted trees (which flourished) and hired the architect Sir Charles Barry to build him a villa (Cowell's Villa, demolished 1974) for his own private use. An 1863 sales map shows no apparent changes to the layout apart from the fact that the loop of drive no longer connects between the two gates – it seems that none of the surrounding "villa" plots of land had been sold in forty years.

When Attree died, the estate was sold to a "Mr Duddell of London", who then died in 1887. The estate then failed to sell at auction, and the Racecourse Trustees (who'd recently organised the town's purchase of Preston Park in 1883) negotiated with his widow to purchase the site for £13,500 and organised the necessary repairs and upgrades necessary to turn it into a public park.

In the rear of the east part of the town is situated the Queen's Park nearly in a direct line with Rock Gardens, and Egremont Place. The trees are as yet in their infancy, but still, from their present flourishing condition, there is every prospect of their finally arriving at maturity.

... Two villas have been erected in the Park, one the residence of the Hon. Mrs. Childers – the other the property of Thomas Attree, Esq., which, with elegance of design, combine all the advantages of rural situation.

The whole is now surrounded by a wall of moderate height, round which a road has been formed. The entrances are opposite Egremont Place and Park Street, both of which open into Edward Street.

The Park, to the north of the Marine Parade, is beautifully interspersed with ornamental plantations. It comprises between sixty and seventy acres, has a carriage drive and promenade, and contains some pretty detached villas. At the German Spa in this vicinity chemical imitations of the more celebrated mineral waters of Germany are so ably prepared as to be hardly distinguishable, either in taste or effect, from those of Spa, Marienbad, Pyrmont, Eger, Ems, &c. This place is very fashionably frequented.

lies between Queen's Park Road and the Kemp Town branch of the railway. It is best reached from the Marine Parade by way of Rock Gardens and Egremont Place. The park is about a third of a mile long and a quarter of a mile wide. It contains a small lake which is in high favour with local model-yachtsmen, "regattas" being organised from time to time. Provision is made for tennis and bowls. Brighton is indebted to the Race Stand Trustees for this pleasant open space.

Overlooking the north end of the Park is a fine mansion formerly known as Duddell's Villa, but now occupied as a College by the Xaverian Brothers. It is surrounded by beautiful grounds of about five acres.