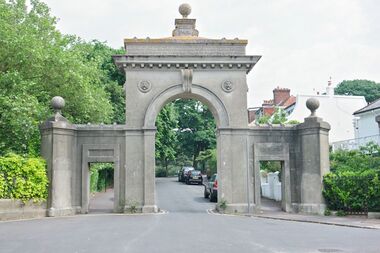 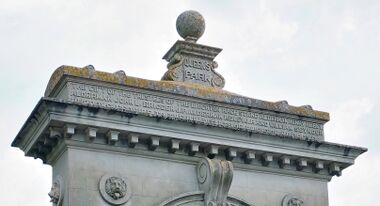 Park Gate is Queen's Park's second arched gateway, and is referred to after the name of the road that leads up to it from the South, Park Street. The continuation of the road beyond the gate is South Avenue.

Park Gate is a "cut down" version of Egremont Gate, smaller and less grand, but keeping the same basic design of a central road arch flanked by two smaller portals for pedestrians. The way that Park Gate is set back from the road passing its front creates a semicircular space, which makes the gate seem a little more impressive than it might otherwise look, which makes one wonder why Egremont Gate doesn't do something similar.

BURROWS ESQUIRE TO THE INHABITANTS OF BRIGHTON. MDCCCXC ~

Lettering inset into the panel above the right-hand pedestrian entranceway, Park Gate:

THE HOVE & BRIGHTON
URBAN CONSERVATION BOARD

AND THE FRIENDS OF QUEENS PARK