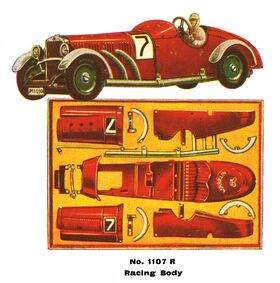 The car is bright red with white running-boards, a black chassis, and a green radiator grille and details, with chrome trim and headlights. It has a large black racing number "7" on the side against a white rectangle, and (in traditional Märklin style), the catalogue number (1103) on the car's numberplate. 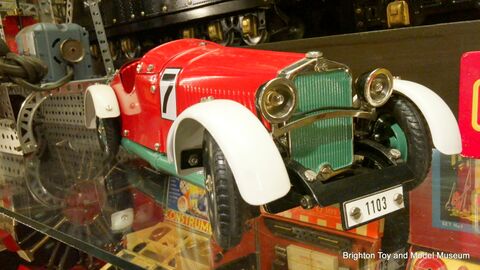 The original 1107 R car was one of a series of Märklin vehicle construction sets that were al built on the same basic chassis, numbered 1101 C (which was why the publicity pictures of these sets tended to have 1101 on the numberplate - the numberplate came with the chassis). The availability of the chassis on its own meant that it was an easy "base" to use for people interested in experimenting with building their own model cars using wood or other materials.

As one of the world's oldest and best-loved metal toy producers with a strong German fan-base, Märklin are known for sometimes releasing utterly authentic "re-issues" of classic metal collectors' pieces from their old catalogues. These reissues are typically selected for their iconic status as models, and also for the importance of the subject matter to German engineering history. Another example of a classic Märklin reissue in the museum is the model Zeppelin suspended above the 1930s gauge 0 model railway layout.

Apart from the fact that the paint formulation is likely to be more modern (and the lack of surface ageing), the car is probably indistinguishable from a 1930s original, so the updated model number on the numberplate is partly a defence against the "reissued" versions being passed off as 1930s originals by unscrupulous dealers.

The Mercedes-Benz Super Sports Kurz ("SSK", "Super Sports Short") was a short-wheelbase version of the Mercedes-Benz "S", and was the last Mercedes to be designed by Ferdinand Porsche. With a supercharged straight-six engine and a 120 mph top speed, it was the fastest car of its time, and is considered to have been one of the greatest racing cars ever built. Since only forty were made, and many of those were crashed (half being built as full-blown racing machines) most of the SSKs in existence are rebuilds or copies, making the SSK one of the most desirable cars in the world for collectors.

In 2004, an original SSK was auctioned for over four million pounds, making it the second most expensive car ever sold.