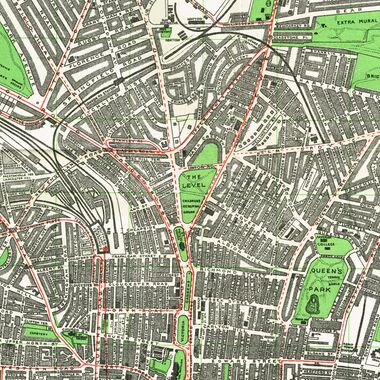 The Kemp Town Line' or Kemp Town Railway from Brighton Station to Kemp Town Station was a very short (only about two miles) section of line that opened in August 1869. Passengers services ceased in 1932, and the line closed for good in the summer of 1971.

The route made a sort of inverted "U" shape, with trains leaving Brighton Station northward along the same tracks as the London line, crossing the London Road Viaduct, passing through the location of the London Road Station and the short tunnel beyond ... but then following a new section of track that curved around the top of Lewes Road until it pointed nearly South, then ducked into a tunnel under Elm Grove, arced around the Northeast corner of the estate that is now Queens Park (while still underground), and emerged from the tunnel a little to the West of the current Queens Park, at a site just north of Edward Street.

The Lewes Road Station opened in 1873, and Hartington Road Halt (more convenient for access to the entrance of the Cemetery) in 1906.

Although it seemed extravagant to build a special line from Brighton station to Kemptown, that required both a section of its own viaduct (which has since been demolished), and its own section of tunnel, the LB&SCR's motivation in building the line seems to have been to "mark its territory" and block any other railway companies from building a station in Kemptown.

The route from London to Brighton had been difficult, not least because of the need to build a terminus station high on a hillside reached by a significantly expensive viaduct, in order for a single station to be able to cope with both the London line and coastal lines running east and west. The station's position was not necessarily optimal for a dedicated London-Brighton line – other suggestions had included putting the station in Hove, or at the top of the valley, north of The Level. Other companies were looking hungrily at the success of the London-Brighton route, and one of these had already applied to Parliament for permission to build an alternative route from London that used other existing track outside London, combined with fresh track that terminated in Kemp Town, a region that had previously not had much of a population but was now being aggressively developed by Thomas Kemp for upmarket housing.

The temporary closure of the line for passenger traffic near the end of World War One, for two years and eight months starting on the 1st January 1917, meant that local travellers transferred their business (and their allegiance) to the tram network, and when the line reopened in September 1919, the passenger numbers never quite recovered, despite the railway improving the regularity of the service to try to compete with the tram system. The final standard passenger train on the line ran on the last day of 1932.

The line continued in light use for goods trains until 1971: when the line was finally completely closed, the event was marked with a special one-day-only day of passenger traffic to allow locals their final chance to ride on the railway before it shut for good.