From The Brighton Toy and Model Index
(Redirected from The Level)
Jump to:navigation, search 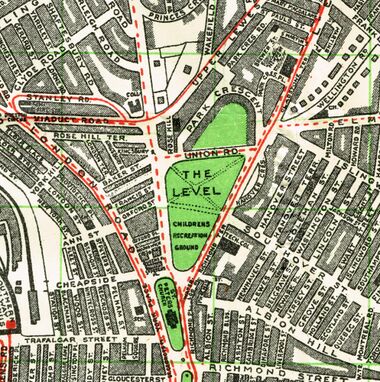 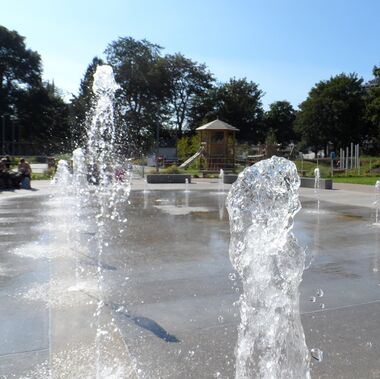 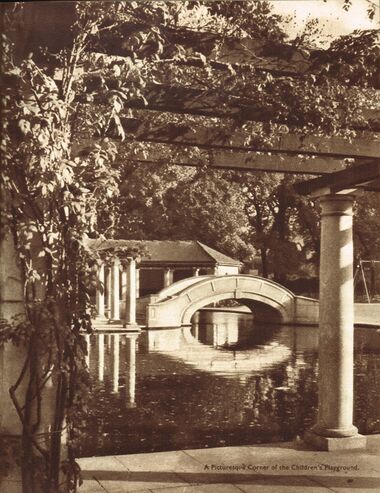 1935: The original boating lake, with one of the bridges and a pergola [image info] 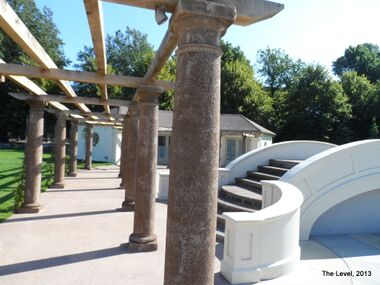 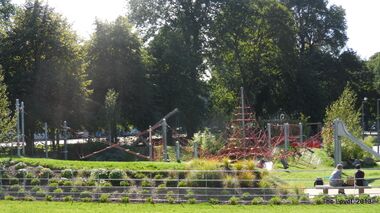 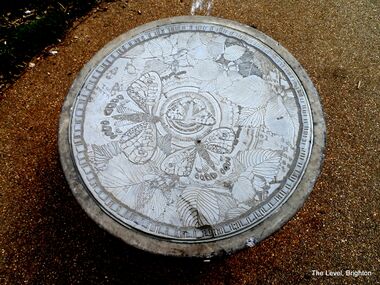 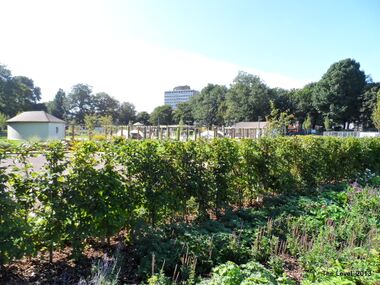 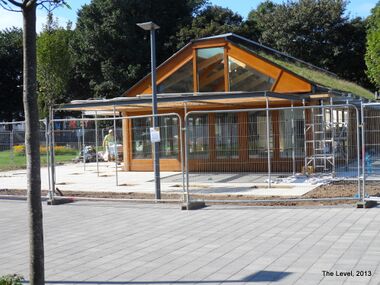 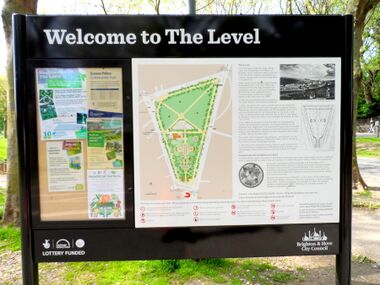 The Level is a wedge-shaped public park north of Grand Parade and St Peter's Church, the recently enjoyed a major lottery-funded regeneration overhaul in 2013.

The land was originally left undeveloped because of the underground stream running below it which tended to make the ground somewhat boggy, which meant that this had remained an open space until the southern part (the part that we now think of as being "The Level"), was given in trust by Thomas Kemp for the benefit of the people of Brighton. Kemp was the developer who created Kemptown on what had been largely open land, and according to some stories the donation of The Level was partly to help the Old Steine area go "upmarket" – fishermen had apparently previously had the right to use Old Steine as a handy area to spread out their fishing nets to dry and repair them, which meant that the area that welcomed visitors to the town could be covered with old rope and smelling of dead fish. Donating part of The Level apparently created a replacement space that the fishermen's rights could be transferred to.

Historical descriptions of The Level are confused by the area's division in 1822 into two sections, the upper part becoming Ireland’s Royal Brighton Gardens, and the remaining lower part becoming what we now know as The Level today. As a result, many descriptions of what used to be at "The Level" actually refer to things that were on the patch of ground to the North, which is now Park Crescent.

Perhaps encouraged by the closure of the Promenade Grove pleasure park (bought up by the Prince Regent in 1803 to incorporate into the private Pavilion grounds), James Ireland purchased the northern part of The Level from Thomas Kemp in 1822 to create a replacement commercial pleasure park, Ireland’s Royal Brighton Gardens. This opened in 1823.

The new Gardens boasted a better cricket pitch, bowls, a billiards hall, an aviary, a maze with a mile of path and a lake. However, perhaps the site was just too far from the seafront to be successful, because despite Royal patronage, Ireland and the park's later owners apparently never managed to make it pay, despite trying all sorts of other attractions (including briefly a "bestiary", or zoo).

The Royal Brighton Gardens ended up being developed for housing, and the remaining green patch that currently shows up on Google Maps almost adjacent to the top edge what we now know as The Level (and surrounded on the other three sides by Park Crescent) is not public land, but a walled-off private garden shared by the surrounding houses of the Park Crescent development.

The Level was reengineered during the 1920s by Captain Bertie MacLaren, who became Superintendent of Parks in 1920 and also redesigned parts of Preston Park, including the Preston Park Rose Garden.

MacLaren's design created a geometrical layout divided into segments isolated by hedges, allowing different target audiences to use parks of the park in different ways without disturbing each other. The southernmost part of the space was a Children's play area, and the middle section was a more peaceful park with a central boating lake flanked by ornamental humpback bridges, and a tearoom and other small buildings. To the north was another divided-off area to be used for sports.

In 2013 The Level was refreshed, rebuilt, replanted and partially redesigned with the help of a substantial grant from the Heritage Lottery Fund and the Big Lottery Fund.

The "rebooted" incarnation of The Level has been a great success, and keeps or recreates almost all of MacLaren's original plan, including the pavilions, columns and pergolas, and the humpback bridges. The main change to the central region is that there's no longer a pond, making the bridges look slightly anomalous. Instead, the original central water theme is alluded to by a series of intermittent "fountain" water-jets embedded in what is otherwise a central concrete walkway region. While losing the central pond is a shame, modern councils are somewhat averse to the idea of having to maintain open stretches of water that require cleaning, refilling, maintenance, perhaps chlorination, and guarding against the possibility of small children or drunken late-night revellers ending up in them, face-down.

The other main addition, in the sports section, is a sunken skatepark – a set of concrete ramps, quarter-pipes and transitions for use by sjkateboarders.

Among the most recent establishments here, is one that promises to increase the attractions for visitants to a very considerable extent; namely, Ireland's Royal Brighton Pleasure Grounds: which, with the attached Buildings, Bowling Greens, Cricket Ground, Racket Court, &c. include upwards of 10 acres of land; and have been completed within the last and present years, at an expense, as stated, of several thousand pounds. These grounds are situated between the London and Lewes roads, and are wholly enclosed by a brick wall and the buildings belonging to the premises.

The Cricket Lawn, which is to the south, is separated from the Pleasure Gardens by a capacious building, with awnings right and left, containing on the lower story, a commodious bar, reading rooms, and various other apartments; over which is a Saloon and Promenade Room, measuring 80 feet in length, and 30 in breadth. The Gardens, which are tastefully laid out in plantations and shrubberies, include a bowling-green, maze, &c.; the windings of the latter are a mile in length, and in the centre is a Merlin's swing. In different parts of the Gardens are, also, several mimic buildings, as a Gothic Tower, with embrasures, and cannon; a Bridge, a Gothic Chapel, an Aviary, and a Grotto: most of them include tea boxes; and in the Aviary are various species of singing and other birds. The principal entrance to the Cricket Ground, &c. is by a neat lodge at the south-west angle, and in the adjoining building is an excellent Billiard table. On the east side, near the Racket Ground, is another entrance, connected with an Inn, or Tavern, having the sign of the Hanover Arms, adjacent to which is a range of stabling, &c. Additional accommodations, including a Pump Room for supplying Medicated Waters, are in progress Public Galas and Dejeunes are intended to be given here during the summer season; and an orchestra will be added to the other attractions. These grounds were indebted for their name to his present Majesty. *

The valley of the town, it may again be noted, is practically a continuous chain of gardens, from the Old Steine to the Level. ...

, the farthest inland of this series of gardens, is an open space of about ten acres north of St. Peter's Church, girdled by trees, and nearly triangular in shape, the largest side measuring about 400 yards.

The Level was a large low lying , damp open area belonging to the Manor of Brighton and for centuries used as pasture. From the 1750s, Brighton developed as a popular seaside town and soon expanded in all directions.

When North Steine became a fashionable landscaped area in the later 1700s, the Level became increasingly important for recreations such as cricket and festivities. At this time it was called the Prince's Cricket Ground, as the Prince Regent played cricket here from the 1780s.

Further housing development surrounding the Level made its use as a pasture difficult.

In 1822, the land to the north was sold off and the remaining area which forms the level today was given in trust by Thomas Read Kemp, his heirs and assigns "for the inhabitants' and visitors' exclusive benefit and for the improvement of the town". Later under the Brighton Borough Extension Act of 1873 it was vested to Brighton Corporation and is now managed by Brighton & Hove City Council.

In the 1920s the southern end of the park was redesigned by Captain Bertie Hubbard MacLaren, the Superintendent for the Brighton Parks Department. His symmetrical layout which included features such as shelters, pergolas, ornamental boating pond and bridges were intended to disguise the play equipment and create a garden setting for other users.

Rose Walk, which MacLaren also designed, was formerly the site of a food market which ran c.1914 until 1926, when it moved to the current location of the Open Market.

In 2013 the Level's important historic features were restored and its social heritage recorded and celebrated thanks to funding from the Heritage Lottery Fund and Big Lottery Fund "Parks for People" grant.

To celebrate the Level's restoration in 2013 local community artist team Sarah Arnett and Tom Hardiment were commissioned to create a new art installation to reflect the park's history, culture and importance.

Working in consultation with local people and the children of St. Bartholomew's school, they have created an artwork with the emphasis on beauty and community. It features Brighton's Elm collection, birds, butterflies and nature; combining it with architectural icons of the city; and a time line of dates that represent historical, environmental, cultural and community events.

Sited on the intersection of the paths, at the centre of the north lawns, the finished effect is inclusive, interactive and playful, creating a stepping stone effect. Combining seating, it is arranged to reflect the soapbox debate; a meeting place; and a starting point for political rallies – so important to Brighton's heritage.

Media in category ‘The Level’