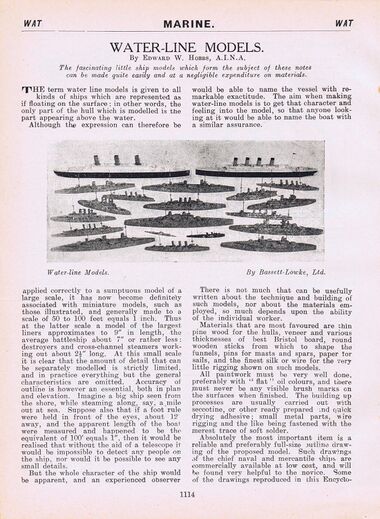 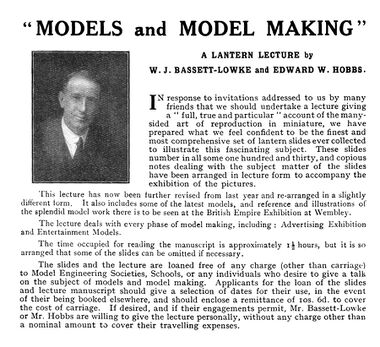 1924: Slideshow lectures given by Hobbs with W.J. Bassett-Lowke [image info]

Edward Walter Hobbs (born in 1885) was general manager of the Bassett-Lowke shop in Holborn, London, from its opening.

The Fuller book (p23) says that Hobbs apprenticed at the age of 12 to the British Automatic Machine Company (which, if this means the British Automatic Company, was a business making coin operated railway station and pier vending machines, label stampers and ticket machines), and spent some time with the naval architect Linton Hope.

Fuller also mentions that Hobbs was a major figure in setting up a Model Yacht Club that met at "The Bun Shop" (in The Strand?), not far from the Holborn site.

Bassett-Lowke already had no shortage of model railway experts. Where Ernest Twining seems to have been the aircraft specialist in the Bassett-Lowke organisation, Hobbs seems to have taken in the role of the company's in-house "ships and boats" expert, and the Holborn branch benefited from a range of model boats that Hobbs commissioned to be built by London-based companies (and probably also designed). If Hobbs was involved in model yacht club activities, they he'd have had his "finger on the pulse" as to what London-based model yachtsmen wanted, what else was already available from other sources, and how much they were prepared to pay. The Holborn shop is supposed to have done very well under Hobbs' managership, and contemporary photographs show it with model boats very visible in its window displays.

Although Hobbs' primary interest was maritime engineering, and eleven of the books listed below are about boats and ships, he was also able to write books on other subjects as diverse as veneering and house repairs. It's tempting to see the influence of W.J Bassett-Lowke in the subject choices of "Cinematography for Amateurs" (WJ was a keen amateur cinematographer, and wrote the occasional article on the subject) and "Bootmaking" (Bassett-Lowke Ltd. was based in Northampton, which was the world centre of the bootmaking industry).

A book listing culled from online bookseller listings. Years may not always refer to the date of the first edition.