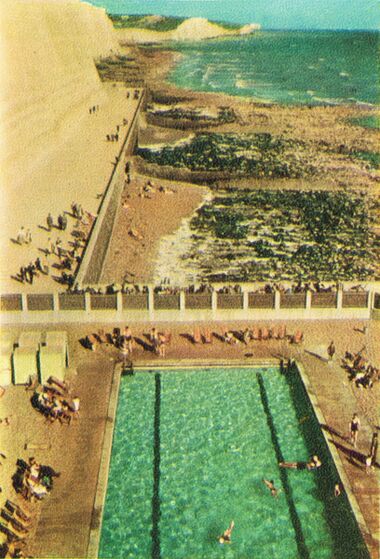 The principal Baths in Brighton are – Mahomed's Turkish and Indian medicated vapour and shampooing baths, situated at the corner of the Junction Parade; Harrison's baths nearly adjoining; Lamprell's swimming baths, at the bottom of East Street; Hobden's artillery baths, facing the battery; Creak's warm and cold seawater baths near East Street; Bannister's, late Williams's, at the bottom of the Old Steyne; and the Brunswick baths in Western Street. There are also baths constructed at the outer head of the Chain Pier. Bathing machines are stationed on the beach for the convenience of those who prefer an immersion in the sea itself, which they may enjoy for the moderate charge of sixpence. Every attention is paid to the convenience of bathers, the ladies and gentlemen have separate situations for this wholesome practice allotted to them, and which, it is only necessary to observe, have invariably given satisfaction to all parties. The machines are commodious and sufficiently numerous, and attendants or guides, male and female, more expert and careful than they may boast of having, are no where to be found.

A few observations on this subject may be of great utility, although in many cases they may not supersede, the advice of a skilful physician, they may frequently prevent the ill effects of inadvertency or ignorance in the patient, of the nature of his complaint. Many consequences attend what is called the first shock of bathing; this, and the sudden diminution of animal heat, are generally different in several persons, according to the state of the feelings and health of the person at the time, modified also by peculiarities of the constitution. Under a state of actual disease, its influence and effects vary so much, that we may observe it sometime after putting on the usual clothing; if a genial glow suffuses itself over the surface, and a pleasing warmth succeeds, accompanied by refreshed and invigorated feelings, this effect is generally considered as a proof of the salutary influence of bathing, but if these sensations do not follow, it is the commonly received opinion that cold bathing, so far from contributing to the restoration of health, may, if persisted in, be the cause of bringing on disease. Chilliness after cold bathing, with langour, lassitude, head-ache, and a disposition to drowsiness, are infallible intimations that the practice should not be persisted in. To the generality of persons one or two immersions are sufficient; but this will depend upon the effect experienced after a few trials. Many invalids who bathe for the mitigation or relief of local complaints, have been disciplined into cold bathing, by passing a tolerable quarantine on the borders of the sea; we recommend to begin with a warm bath, afterwards a tepid bath, then the cold bath may usually be taken with safety. Invalids should avoid bathing before breakfast.

THE WARM BATH AND SEA AIR

The power of the warm bath over the morbid action is often very instantaneous and wonderful; bodily irritation is suddenly soothed by it, and tranquillity introduced when other means fail. The necessity of exercise before and after the warm bath is every day proved, and is held as one of those general rules to which there are very few exceptions. The time for remaining in the warm bath is from twenty minutes to half an hour. Cases have occurred in which the warm bath has been used with considerable advantage; in the morning immediately on rising, and when sleep has been restless and irregular, the bath has proved an admirable substitute for irritable habits, and for a time prevented the recurrence of broken and unrefreshing rest. In scrofula, gout, and rheumatism, by persevering with regularity, and in all cases rubbing very dry, much benefit is experienced. The use of the warm bath is preferred in the temperate and warm months; those who use the cold or warm sea-water baths, soon become sensible how much the air of the coast contributes to general health. Upon the young, and those debilitated by years, its effects are often surprising; children too, whose existence in more confined inland places often seems precarious – often derive great benefit when removed to the sea, where also the aged are often seen to obtain a regeneration of health and spirits by the sea air. The gout is one of those complaints that are frequently alleviated by the conjoined use of the warm bath and a residence on the sea coast; insensible perspiration flows more regularly in persons living near the sea than elsewhere. What is called chronic rheumatism, in the application of the warm bath, frequently finds a remedy on which much reliance can be placed.