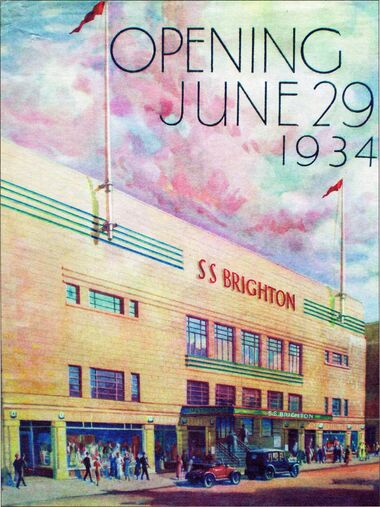 1934: Poster for the S.S. Brighton opening, 29th June 1934. This would seem to be the West Street frontage, which would put St. Paul's Church directly to the right of the picture [image info] 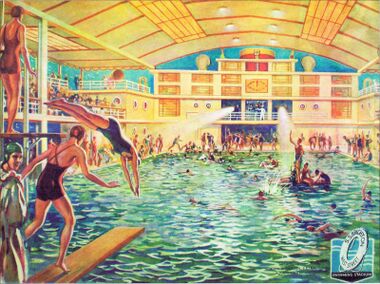 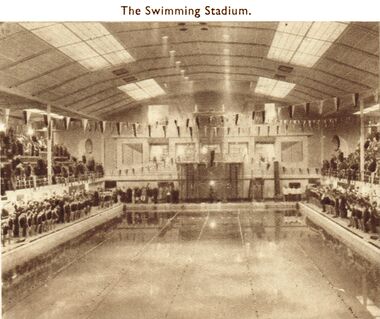 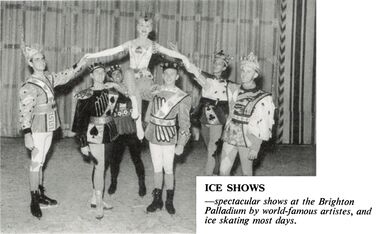 The S.S. Brighton (for "Sports Stadium Brighton" (not to be confused with the six ships that had carried the name "S.S. Brighton", three of them built by the LBSCR) was billed as the world's largest covered seawater swimming pool, and opened in June 1934 on the site of the old (George Inn?), off West Street. Users of the pool included Olympic swimmer Johnny Weismuller, who after retiring from competition had famously gone on to play Tarzan in a series of movies from 1932 onwards.

The facility closed in around ~1965, and was demolished a few years later.

The similarity of the pool's title with ship naming was not accidental – the building's interior design and fittings were styled to make is look as if the pool was set into the deck of an ocean liner (with upper walls coloured blue to represent sky).

The water is treated by adequate filtration and Ultra Violet ray treatment, and provision made for a turnover every 3¼ hours in peak periods. Temperature is regulated to suitable conditions in winter and summer.

Many championship events are held there during the year, there being seating accomodation for over 2,000 spectators.

Although the opening of the pool created an initial burst of publicity and interest, the subsequent fall in attendances prompted the owners to close the pool for a fortnight and reopen it in mid-October 1935 as an ice rink, as the Brighton Sports Stadium, the new name reflecting the emphasis on sports and downplaying the maritime associations of the "S.S." prefix, which were no longer as relevant now that the facility was an ice rink.

The facility's new incarnation was more of a success, and the local Brighton Tigers became one of the country's best-known ice-hockey teams.

For a short period from about ~1959 until ~1962, the venue was rebranded (from the point of view of publicity) as The Brighton Palladium, presumably in order to present itself as a more theatre-like concert venue and attract top acts. However, this nominal renaming doesn't seem to have changed the locals' idea of what the building was called, and photographs from the period seem to show it still with the SPORT STADIUM and ICE RINK raised lettering, but with BRIGHTON PALLADIUM added to posters on the building and lettered across the front of the entrance awning.

The building was located at the corner of West Street and Russell Road, just to the South of St Paul's Church, a site that is now occupied by a new redbrick building that is home to a financial services company.