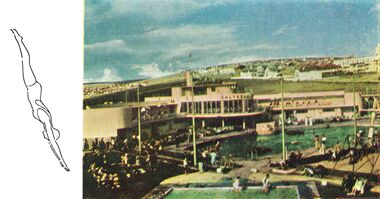 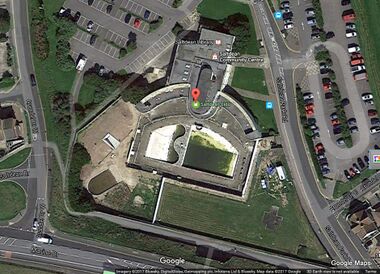 Saltdean Lido is an Art Deco outdoor pool and leisure complex backing onto a park on the Eastern side of the current Brighton and Hove, built in 1938, and designed by Richard William Herbert Jones (1900-1965) (usually credited as R.W.H. Jones).

Hundreds of open-air pools were built in the UK in the 1930s, many using the name "lido" (Italian for "beach"), as a probable reference to the popular seawater bathing spot Lido di Venezia that was being visited by British tourists on the Continent. Saltdean Lido is described as probably the finest lido in Britain, and is the UK's only lido with listed building Grade 2* status. After a restoration, the Lido is due to open in June 2017.

As well as the adult and children's pools, the Lido's original design featured a sand beach, sunbathing deck and a large modern (1930s) café.

YOU CAN HAVE A JOLLY TIME AT THE
SALTDEAN LIDO
BRIGHTON

Just look at this photograph. There's evidence enough that hundreds of visitors are making "EVERY DAY A HOLIDAY" at the Saltdean Lido. The MAGNIFICENT SWIMMING POOL is 140 ft. by 66 ft. with a water capacity of 300,000 gallons. Ample space for 500 bathers. The blue-coloured tiled bottom and sides give a beautifully coloured effect to the water. Continuous treatment by latest system of filtration and purification. Separate changing cubicles for men and women, with special clothes hanging system. Pool and terraces floodlit at night.

AQUATIC Sports and water polo during the Season.
IDEAL SUN BATHING FACILITIES are provided on real crisp seashore sand. Sun umbrellas and reclining chairs. Protection on all sides
CHILDREN'S RECREATIONS. There is a fine children's paddling pool, 60 ft. by 30 ft. Chute provided. Boating lake with paddleboats, etc., and attendants on duty at all pools.
LUNCH OR TEA is served in the café, on the terraces, or in the Sun Room. The tea café will accommodate 500 people. Soda fountain and shops for the sale of confectionery and cigarettes.
CAR PARK for 1,000 cars. Frequent buses from Brighton direct to the Lido.

Lido open 9:00am daily during the season, Sundays included. Admission 6d Residents and visitors alike enjoy themselves at the

Saltdean and the Lido

Property Speculator Charles William Neville (1881-1960) started acquiring land in the Saltdean area through the early 1920s, and by 1924 was able to set up the Saltdean Estate Company and mark out streetplans and plots. Neville, who had other business interests in Canada and the US, had started on his plans to develop this area section of the coast just before WW1, but his initial development work at Peacehaven drew a great deal of criticism. For Saltdean, Neville seemed to decide to "pull out all the stops" and put some serious investment into facilities and architecture.

Saltdean was a small hollowed bay ("dean" meaning "riverless valley"), and Neville laid out an oval park, Saltdean Park (also known as Saltdean Oval) as the centre of the development in the early 1920s.

The Lido was added in 1938 at the South edge of the oval, at a site that had been earmarked for a future "crown jewel" development. As a natural suntrap with side-protection from winds, the Lido's decks could capitalise on the new fashion for sunbathing, the pool facilities could service the 1930s enthusiasm for swimming, the diving boards catered to a recent Scandinavian sporting fashion that couldn't be satisfied at the beach, the facility featured proper beach sand, and the diner-style cafe and "new Hollywood"-style architecture lent an air of Californian glamour to the facility, emphasized when Olympic swimmer and Hollywood "Tarzan" film star, Johnny Weissmuller opened the lido in April 1938. And if anyone still wanted to visit the real beach, a handy tunnel led directly from the Lido down to the beachfront.

With architectural styling details designed to evoke the larger luxury cruise liners, the Lido represented a movement towards affordable "luxury for all" - this wasn't an exclusive private members' club, it was a place where all classes could mix on equal terms, open seven days a week during peak season, and able to cope with five hundred visitors at a time.

The outbreak of World War Two in late 1939 led to the Lido's closure in 1940, with the pool pressed into service as an easy-access water supply for the fire service.

Although well-known, and architecturally lauded, the comparatively short amount of time that the Lido was open before the war may have created some uncertainty in its owners as to how best to relaunch it, and after the end of WW2 in 1945, the Lido remained obstinately shut, existing as essentially just a landmark until the Council eventually succeeded in mounting a rescue bid and compulsorily purchase in 1961. The Lido finally reopened in 1964, retrofitted with a new library and community centre, after having been closed for around a quarter-century.

Issues with running costs resulted in the Lido closing again in 1995, but local outcry over plans to permanently fill in the pool and redevelop the building led to another rescue effort, and the renovated pool is now due to open again to swimmers in June 2017.

Jones' other creations include Saltdean's white, curved-fronted Art Deco Ocean Hotel (later renamed the Grand Ocean Hotel), which, while larger and more imposing and a quite workable building, has a facade that arguably lacks the prettiness, focus and beauty of the Lido. The "Ocean" used a popular 1930s Art Deco trick (also used on the Lido and inside central Brighton's 1930s S.S. Brighton swimming pool building) of "borrowing" elements of ocean liner superstructure design for its facade, including ship-style railings. Some early publicity material for Saltdean showed a large hotel on the Lido site, so it's possible that the Ocean might have originally been intended to sit at the base of the Oval facing the sea, which might have made more sense than its actual location.

During WW2, the local fire services used the Ocean as a base, with the local Lido serving as their fire engines' water supply.

For a while, the Ocean Hotel was converted into a Butlins Holiday camp, and has recently been converted again, into flats.