Working primarily out of Northampton, Kleemput opened his own design company (Acorn Technical Design Services) and continued to work for Mettoy as an independent designer after the company's crisis in 1983, rather than move to Wales. During this time he did a wide variety of other design work ("I never turned anything down") including designing computer cases for Thorn EMI. In his spare time he also designed his own furniture and housefittings.

Recognising that there was not much point in trying to compete with the well-established Dinky Toys brand if one was just going to produce the same sorts of models that they were already making, Cleemput continually tried to "push the envelope" with new design features, using plastic for windows and upholstery, including opening doors and bonnets, and, as Dinky eventually followed suit, going further to introduce sprung suspension, and on one model, even moving windscreen wipers.

Cleemput attributed Corgi's success in the tiein character-merchandising market to the company getting an early successful start (with a model that merely required a transfer to be added), and his and his team's ability to measure up an original vehicle faster than their competitors, which was an important factor when visiting film sets or creating models at extremely short notice to coincide with film releases. His team would not only take conventional measurements to supplement the ~70 photographs that Cleemput would take (and develop himself, to save even more time), but would also bring large sheets of paper to do "rubbings" of complex parts and curves, and details such as radiator grilles.

"The Great Book of Corgi" 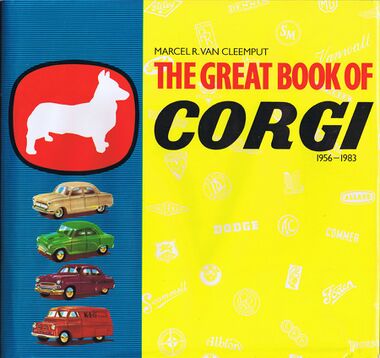 Cleemput became a well-known and much-loved figure in the toy collector community, after writing the definitive book on the history of Corgi Toys ("The Great Book of Corgi"), and visiting various collector events to sign copies. He also seems to have been much-liked by everyone he visited on his dealings on behalf of Corgi, from Formula One racing-car crews (who he'd visit to measure up their cars) to the production crews on the James Bond movies.