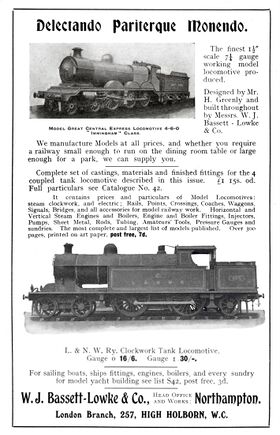 1909: Bassett-Lowke advert for a L&NWR Precursor Tank locomotive in gauges 0 and 1, presumably the model made for B-L by Märklin. The image shows a real Precursor tank loco rather than the model, suggesting that perhaps the final production models weren't yet available when the advert was created [image info] 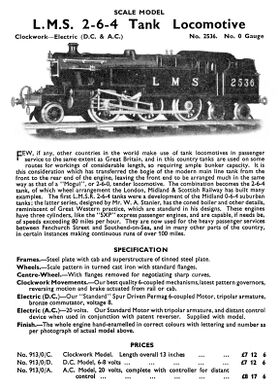 Bassett-Lowke locomotives made by Märklin.

Most of the German-built model railway equipment sold by Bassett-Lowke under their own name was built by Bing and by Georges Carette – Bing had been W.J Bassett-Lowke's first Continental contact at the 1901 Paris Exhibition, and after a brief experiment with B-L selling a steam-powered Märklin Precursor Tank engine in ~1910, the company seems to have reverted to using Bing as a manufacturer, who tended to be better at producing small, slickly-designed gauge 0 locomotives with decent proportions in the smaller scale. Some other Märklin pieces (such as their Charles Dickens loco) appeared in the B-L catalogues, but these were "general" Märklin production, and not exclusively sold by B-L.

However, in the mid-1930s Bassett-Lowke faced something of a supply crisis with Bing having gone bust (and Craette having closed down during WW1), and turned to Märklin to help fill out the missing pages in its catalogue.

As well as supplying Bassett-Lowke with Continental-outline locos, Märklin produced four locomotive designs specifically for Bassett-Lowke in the 1930s:

, three of which are on display in the museum.

... four gauge 0 German-made, British-outline locomotives. These four locomotives, which were exclusive to Bassett-Lowke, were a 4-6-0 "King" class, a 4-6-0 5XP, a 2-6-4 tank and a "Schools" class 4-4-0. This series proved to be the last gauge 0 locomotives to be produced by the Germans for the British.

Pages in category ‘Märklin for Bassett-Lowke’

Media in category ‘Märklin for Bassett-Lowke’